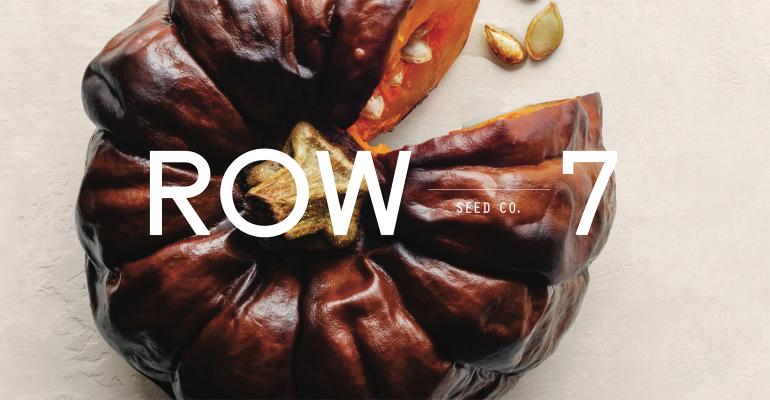 Dan Barber has launched a seed company that, unlike other seed producers, is focusing primarily on flavor.

Starting with seven vegetables — a beet, a pepper, a potato, a cucumber and three varieties of squash — the company, Row 7, will put into business practice what Barber said he’s been doing “informally” for the past 10 years or so, having conversations with plant breeders across the country about produce that he, as a chef and restaurateur, would like to work with more.

Barber is the chef and owner of Blue Hill in New York City and Blue Hill at Stone Barns in Pocantico Hills, N.Y., and has long been a champion of working with farmers to create great produce.

“Even the best farmers, if the genetics aren’t there in the seed — if the potential for this really great flavor isn’t there from the outset — then it’s impossible to elicit something that’s not there,” he said.

That’s why chefs turned to heirloom vegetables, he said — because they taste great. The problem is that those vegetables don’t produce much compared to those developed by large seed companies that for decades have bred produce for long storage life, high yield and uniformity, Barber said.

“We’re going in the other direction,” he said — starting with great flavor, but also breeding those great tasting plants to produce high yields and to be robust enough to perform well in organic soil, where synthetic pesticides and fertilizers aren’t allowed.

At Row 7 Dan Barber is working with vegetable breeder Michael Mazourek, an associate professor of plant breeding and genetics at Cornell University in Ithaca, N.Y., and Matthew Goldfarb, an organic seed grower in the Finger Lakes region of New York state who also has a background in researching small farms at Cornell.

Barber and Mazourek have worked together previously to produce the Honeynut squash, a small, tasty variety of the butternut squash that is now widely available.

The seeds currently available, produced through breeding and without genetically modified organisms, are:

• Badger Flame Beet: This cylindrical bright orange-yellow sweet beet doesn’t have “the polarizing earthiness” of many beets, according to Row 7’s promotional material. Developer Irwin Goldman of the University of Wisconsin-Madison bred the Badger Flame to eliminate geosmin, the compound responsible for the dirt/earth flavor that turns many people off from beets.
• Robin’s Koginut Squash: Developed by Mazourek, this sweet, “intensely squash-y” squash turns color from green to bronze when it’s ready to be harvested.
• Habanada Pepper: Also developed by Mazourek this relative of the habanero has a floral/melon flavor similar to its intensely spicy cousin, but isn’t spicy itself.
• Upstate Abundance Potato: These golf-ball sized potatoes were developed by Walter De Jong of Cornell University and Row 7 says their white flesh has an “exceptionally creamy texture and nutty flavor.”
• 898 Squash: This is a smaller, next-generation Honeynut developed by Mazourek for higher yield, great flavor and a thicker skin that allows for longer storage. It’s still in its trial stage and Row 7 is inviting feedback from chefs, growers and “eaters.”
• 7082 Cucumber: Also in trial stage, this creation by Mazourek has a bit of bitterness that not only adds complexity of flavor but also deters pests.
• Butternut 661: This is a larger, longer-storing version of the Honeynut developed by Mazourek and intended for processors.

Barber said he is “looping in a large collaborative of chefs from around the country and eventually around the world that we want to participate in evaluating ideas, evaluating trials, and even entering into their own conversations and own directions with breeders that we set them up with.”

He said his goal is to bring together chefs with plant breeders who don’t normally speak with chefs and “making those connections and being very directed at the eventual outcome,” which is to produce better vegetables for chefs to work with.