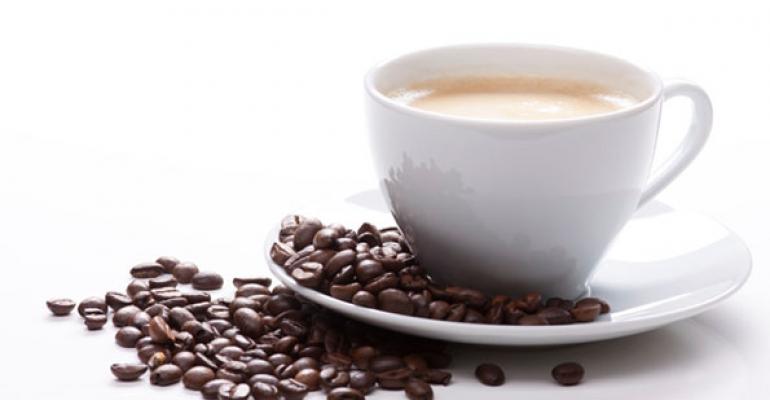 Over the past couple of decades, no item on the menu has undergone a more dramatic transformation than coffee, which has transitioned from a commodity, bottomless-cup giveaway to a value-added signature that drives traffic and margins. The category continues to evolve at a rapid pace with recent innovations like Starbucks’ introduction of Cold-Brew Coffee and Chick-fil-A’s commitment to THRIVE, a farmer-direct, sustainably sourced coffee supplier. Hipsters are swilling nitro coffee made by introducing nitrogen into a keg of coffee to yield a fizzy, beer-like drink on tap, and hucksters are promoting the salutary effects of Bulletproof Coffee, which combines coffee with butter and coconut or palm oil. Last year, Packaged Facts pegged the US coffee market at $48 billion, and while the lion’s share of sales is obviously beverage driven, more and more is finding its way into food.

Coffee is prized for the rich complexity it brings to items like the Caramelized Celeriac Cappelletti at Tête Charcuterie in Chicago, where coffee combines with hazelnut, brown butter and truffles to add depth to the dish. The Lighter Take Chicken Marsala at Maggiano’s Little Italy is made with a char crust that contains coffee, oregano, parsley and smoked salt to amp up taste while keeping calories in check. Fairsted Kitchen in Boston menus Braised Oxtail with coffee, rutabaga, date and sesame; and Grange Restaurant & Bar in Sacramento has featured a special Wagyu steak braised in a combination of star anise, jalapeños, cilantro and coffee beans.

Coffee is also valued by chefs for its subtly bitter undertones. A flavor dimension that has been largely missing on American menus, bitterness is booming at bars in specialty cocktails and has slowly made its way to the kitchen. Stoney River Steakhouse’s Coffee-Cured Filet Mignon benefits from coffee plus brown sugar and molasses, and the promotional Pumpkin Spice Latte Burger at Umami Burger is made with a coffee glaze and finished with a coffee-molasses drizzle. In both cases, the coffee provides a bitter counterpoint that contrasts with the sweetness of the other elements.

Ingredient compatibility. Coffee marries well with many foods and flavors. Dallas-based Liberty Burger created the Magna Carta Burger, in which a coffee-rubbed bison patty was topped with jalapeño queso blanco and cilantro-lime aïoli.  J. Coco in Omaha won plaudits for its pork tenderloin rubbed with coffee and cocoa and served with chorizo-cornbread stuffing and a butternut-squash sauce with chipotle. Bistro du Midi in Boston prepared a Valentine’s Day special of seared duck breast with coffee-scented jus and purple cauliflower, while nearby Alden & Harlow, in Cambridge, Mass., has treated diners to coffee-roasted golden beets.

Sweet stuff. Coffee has a long history on the dessert menu. Carrabba’s classic tiramisu with lady fingers dipped in liqueur-laced espresso, layered with sweetened mascarpone and topped with chocolate shavings is one good example, and Arby’s long-running Jamocha Shake with flavors of chocolate and coffee is another.  Tony Roma’s ran a menu promotion last winter that boasted a chocolate doughnut with espresso mousse, and trendy Publican Quality Meats in Chicago jumped on the cold-press bandwagon with Cold-Press Coffee Ice Cream. Coffee and ice cream go way back together, and new-age specialists continue the tradition. In Portland, Ore., Salt & Straw brings together local favorites in Stumptown Coffee and Burnside Bourbon Ice Cream, while Coolhaus goes international with Vietnamese Iced Coffee Ice Cream with chicory.

Creative quaffables. Coffee forms the basis for a wide range of specialty beverages, too. At Pinewood Social, a Nashville hot spot, coffee-based cocktails include Jesse’s Girl, with aged rum, grappa, sweet orange spices, as well as coffee; and Southern Limerick, which has coffee, rye, heavy cream and Amaro Meletti. Its extensive list of nonalcoholic coffee specialties includes The World in All Its Youth, an homage to New Orleans that combines chicory, sarsaparilla and mint.

Looking ahead, innovation in the coffee category will yield results in unexpected places. A spicy coffee jerky was introduced at the Fancy Food Show that reflects the meteoric rise of jerky as a protein-rich snack. Frito-Lay’s Do Us a Flavor promotion invited consumers to create their own potato-chip flavor and led to Lay’s Cappuccino Chips, an unlikely sweet-savory-salty mélange. Also coming on are coffee vape pens, which allow the consumer on the go to simply inhale his morning Joe.

Nancy Kruse, President of the Kruse Company, is a menu trends analyst based in Atlanta. As one of LinkedIn’s Top 100 Influencers in the US, she blogs regularly on food-related subjects on the LinkedIn website.