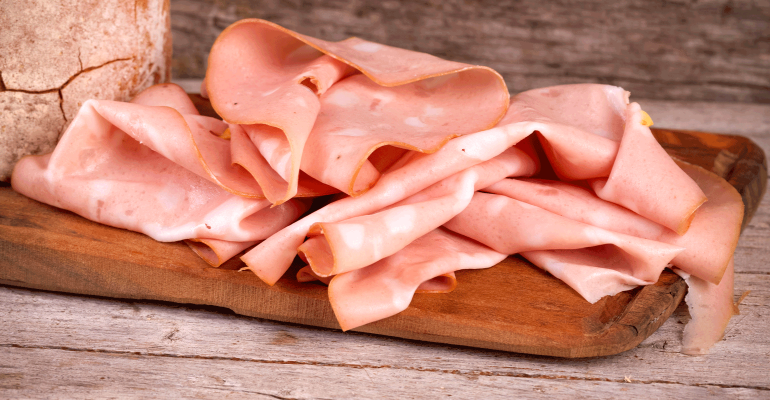 Chefs serve up a bunch of bologna

Bologna has long led a double life in America. On the one hand, consumers use the term “boloney” to signify the ubiquitous deli item that appears on sandwiches everywhere, while on the other, they employ it as a slangy dismissive that is synonymous with drivel. The origins of the latter expression are cloudy, though pop-culture historians usually credit the entertainment trade paper Variety, which employed the word “boloney” back in the 1920s as a mildly colorful pejorative.

The origins of the meat are much clearer, however: American bologna, or boloney, is first cousin to mortadella, a classic pork sausage indigenous to Bologna, Italy. High-profile chef-butchers here have put charcuterie and salumi, typically cured in house, in the menu spotlight, and in doing so, they’ve given a boost to bologna.

Plain and simple. While bologna transcends geographic boundaries in the U.S., it has a strong connection to the pork-centric South, where regional restaurateurs have rediscovered its tasty simplicity. A great case in point is New Orleans’ lauded sandwich emporium Turkey and the Wolf, where the signature fried bologna sandwich piles three slices of locally-smoked bologna with fried potato chips and hot mustard atop white bread, the use of which is de rigueur for true connoisseurs of this humble classic. On the late-night menu at Marcel, a chic, new-age steakhouse in Atlanta, Marcel’s Stack is stacked with fried bologna and American cheese, another unpretentious and requisite ingredient; by contrast, the lunch version at Sweet Potatoes in Winston-Salem, N.C., changes things up a bit with pimento cheese, another Southern standard. Hardee’s, the hamburger chain with very deep roots in the Southeast, has featured a Fried Bologna & Velveeta Biscuit with egg as a breakfast promotion.

North of the Mason-Dixon Line, brunch at trendy Roister in Chicago includes a fried bologna sandwich decked out with olive relish and provolone. In the promotional Coney Baloney Burger at Blue Door Pub in St. Paul, Minn., the burger patty was topped with all-beef bologna, chili, mustard and onion. This last item is reminiscent of the Baltimore Dog, which is indigenous to that city and in which an all-beef hot dog is wrapped in a slice of bologna and then covered in relish, onions and spicy mustard.

Innovative and uptown. Although the bologna sandwich benefits from its image of comfort and nostalgia, it can also be the starting point for contemporary menu inspiration. The bologna sandwich appetizer at Corner Table in Minneapolis is served open-faced on a mini brioche, topped with a small round of mortadella and crowned with an equally diminutive fried egg; the savory small bite is finished with mustard aïoli.

Swordfish Bologna at The Macintosh in Charleston, S.C., taps into the “sea-cuterie” craze by substituting swordfish for pork and topping it with beet-horseradish vinaigrette. When Wisconsin-based Rare Steak & Seafood opened its third unit in Washington, D.C., this winter, local restaurant reviewers were wowed by the over-the-top Muffuletta sandwich made with fried bologna and Wisconsin cheese curds.

Ethnic elaborations. Diner familiarity with the sausage along with its relatively mild flavor have allowed it to cross culinary borders in unconventional limited-time offers, like Baloney Bao at Underbelly, a restaurant dedicated to whole-animal cookery in Houston. The item started with a steamed lotus bun, then added house-cured bologna, Japanese Kewpie mayonnaise and shaved lettuce. Clyde’s on Main, a standout in the burgeoning restaurant scene in Chattanooga, Tenn., featured a bánh mì sandwich with homemade Asian bologna, daikon slaw, garlic mayo, pickled vegetables and hot chile sauce on a toasted baguette. And Sobban, a Southern diner with Korean accents in Atlanta, offered an East-meets-West Kimchi Bologna Sandwich.

Looking ahead, we’ll likely see a parallel revival of Spam, another meat product (originally a contraction of spiced ham) that doubles as a punchline and has also acquired a secondary meaning. It is in the spotlight thanks to growing interest in Filipino and Hawaiian cuisines, where it is a staple. A great example is Aina in San Francisco, which dishes up specialties like Spam Musubi Ssam Style, in which local, artisanal Spam is combined with kimchi, rice, egg and Japanese spices, and wrapped in Bibb lettuce leaves.

Mahalo @michelininspectors for picking our housemade Spam Musubi as one of their #top17of2017 fave dishes of the year!
“...#pork #musubi packed with #sushirice and perched atop a #bostonlettuce cup made for a crowning crunchy bite.” __#hawaiianfo… https://t.co/7VT2riTbi4 pic.twitter.com/DrU3f68QiP