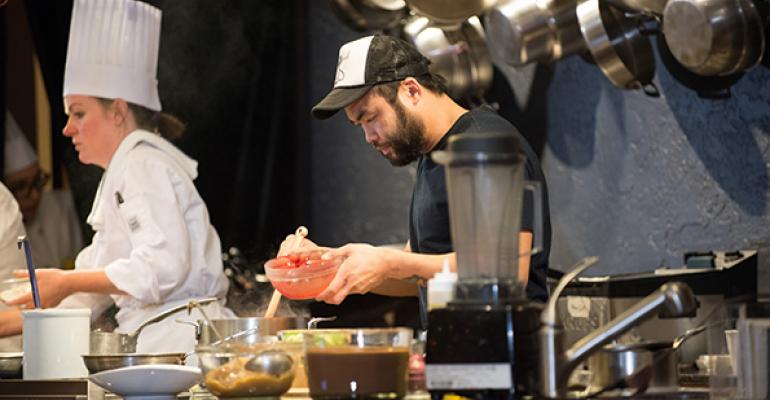 Korean, Filipino flavors could be next on restaurant menus

The culinary world has been immeasurably enriched and fundamentally altered as a result of global exploration across the millennia. The exploits of Alexander the Great, for example, led to the Alexandrian Exchange that introduced citrus fruits and cinnamon to the West, and the voyages of Christopher Columbus brought about the Columbian Exchange and the introduction of corn and tomatoes to European kitchens. The Worlds of Flavor International Conference & Festival, sponsored annually by the Culinary Institute of America, fosters gastronomic interchange on a far more intimate level, as American foodservice professionals have the opportunity to interface directly with chefs from around the globe. This year’s program, entitled “Asia and the Theater of World Menus,” looked to the East for inspiration and was chockablock with patron-pleasing ideas that would be right at home in just about any domestic venue.

Savory pancakes. Korean-born Rachel Yang runs three highly regarded restaurants in Seattle, and she’s also a mother concerned with her children’s nutrition. This combination of culinary prowess and maternal instinct led her to create Broccoli-Cheddar Pancakes, which she avers is the only way her kids will touch that green vegetable. At the restaurant, she plated it with kohlrabi mustard pickle. Savory, gluten-free pancakes are fundamental to Korean cookery and to the menu at Revel, her Asian-fusion operation. The Pork Belly Pancake with kimchi is a consistent best seller, and it’s offered alongside seasonal specials like a springtime option with green curry, sour-apple chutney and coconut crème fraiche. Yang notes that a savory pancake and salad are a popular lunch combination, and it’s one that would readily appeal to many mainstream diners.

Versatile avocados. The avocado juggernaut has made the fruit indispensable on American menus, and it is a go-to ingredient in Asian street foods as well. Chef Robert Danhi, who specializes in the cuisines of Southeast Asia and works to make them accessible to an American audience, talked about the prevalence of avocado in Vietnamese street snacks and demonstrated the point with Grilled Avocado Wedges with Tom Yum Peanut Crunch. Simple and tasty, the dish consisted of grilled avocado wedges sprinkled with a pleasingly crunchy mixture that included crushed peanuts, crispy shallots and garlic and Sriracha flakes. He also whipped up Sinh To Bo, a refreshing smoothie that combined avocado with regular and condensed milks. Either item would work well on menus as part of a light meal or snack, and would allow operators an innovative way to tap into rising customer demand for avocados.

Next-gen condiment. Korean-American chef Edward Lee has been an articulate proselytizer for Korean foods and flavors, and he spoke with particular enthusiasm about gochujang, a chili sauce that many analysts have pegged as the likely successor to Sriracha. Lee pointed out that since that sauce uses the skins but not the seeds of the chili, it’s not overly incendiary. It is fermented, however, and the result is an ingredient that offers both the depth of flavor and the healthful profile associated with cultured foods. Lee uses gochujang in vinaigrettes, sauces and marinades, and its approachability and commercial availability make it a good candidate for crossover. Like Sriracha, it would add authentic Korean flavor, as well as value and interest as a topping on sandwiches or burgers.

Asian adobo. New-York-based chef King Phojanakong is half Filipino, and chef Paul Qui from Austin, Texas, was born in the Philippines. Both extol the virtues of adobo, which is an essential building block of the cuisine. Unlike its Mexican counterpart, it does not typically use chilies, although, as in Mexico, it is vinegar-based and works especially well as a braising medium for proteins. Phojanakong uses it with chicken wings at his restaurant Umi Nam, and Qui parlayed his rendition of classic Filipino adobo to the winner’s spot on TV’s Top Chef competition. Chef Matt Rudofker from Momofuku Ssäm Bar in New York also endorsed vinegary adobo, noting that he prepares duck wings with an adobo-and-pineapple glaze and serves them with molé sauce, a culinary mashup of Korean, Filipino and Mexican flavors that is a good metaphor for the mind-expanding, boundary-shattering Worlds of Flavor confab as a whole.