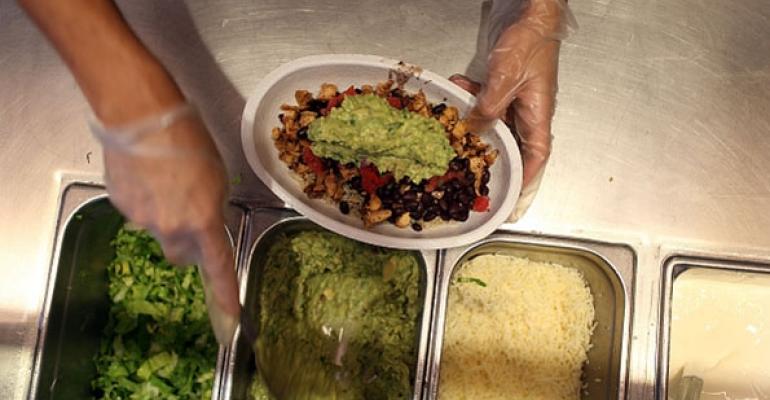 Chipotle Mexican Grill Inc.’s plans to do more high-resolution testing of all fresh produce for potential pathogens may be industry leading, but food safety experts are mixed about the effectiveness of such screening efforts for the prevention of foodborne illness.

Last week, Chipotle said it is establishing more robust protocols for food safety and food handling in the aftermath of an ongoing outbreak of E. coli that has sickened 52 people in nine states. Health officials have yet to identify the specific source of the outbreak.

Chipotle’s new protocols, however, include DNA-based tests of all fresh produce before it is shipped to restaurants, a program that company officials described as far exceeding requirements of state and federal regulatory agencies, putting Chipotle at the forefront of the restaurant industry.

Chipotle previously tested some produce, but the new plan is more robust and will involve more samples, though the Denver-based operator did not offer details.

The chain will also begin end-of-shelf-life testing to ensure quality specifications are met throughout the shelf life of products. The data collected will be used to measure the performance of vendors and suppliers to enhance food safety throughout the system, Chipotle executives said.

Bob Whitaker, chief science and technology officer for the Produce Marketing Association, said various types of testing is increasingly being done at the field level by produce suppliers, particularly among producers of ready-to-eat products and leafy greens. But such tests are not practical as a screening tool, he said. Instead, restaurant chains should focus on whether their suppliers have adequate food-safety programs in place.

“You can’t test your way to safety,” Whitaker said. “The problem with product testing by itself is that it’s hard to take enough samples to be confident that the product is free of any pathogens.”

The rules address the safe growing, harvesting, packing and holding of fruits and vegetables.

Farmers must test the water used on crops, for example, and establish training for workers on health and hygiene practices, as well as establishing controls for wild and domesticated animals on farms and the use of manure. Importers will also be required to meet certain safety standards with accredited third-party certification to verify compliance.

The rules, which go into effect over the next several years, depending on the size of the farm, do not include product testing, Whitaker said.

Ernest Julian, chief of the office of food protection for the Rhode Island Department of Health, agreed that restaurant chains should look for supplier compliance to the FDA’s new produce rules.

However, he said Chipotle’s more robust protocols are “a move in the right direction,” as produce is increasingly implicated in foodborne illness outbreaks.

“Testing is also helpful to assure proper controls are in place and to detect major sources of contamination,” Julian said.

DuPont USA, a global science firm, was one of the first to introduce a genetics-based testing method, known as the BAX System, in 1995. DNA-based testing has since grown steadily since in the food industry, said Kyle Rhoden, U.S. distribution manager for DuPont Diagnostics. Typically, such tests are conducted by suppliers, he said.

Earthbound Farm Organic, for example, describes on its website its practice of screening for E. coli, salmonella and shigella both at harvest and after washing, before packaging.

“Some retailers may perform occasional auditing of their suppliers to ensure testing accuracy, but this is not widely practiced,” Rhoden said.

DNA tests are considered among the most accurate and fast, with same-day testing available for organisms like E. coli or salmonella, said Morgan Wallace, senior microbiologist and validations leader with DuPont Diagnostics.

Some manufacturers don’t wait for results, since produce is perishable, but that introduces the risk of a produce recall if a pathogen has been identified after shipment. Others hold the product until test results are confirmed, but that practice adds holding costs and reduces the shelf life.

That testing, however, did not prevent Costco from dealing with its own E. coli outbreak last month linked to a rotisserie chicken salad sold at the wholesale chain.

The culprit in that outbreak, which sickened 19 people in seven states, was determined to be a celery from Taylor Farms Pacific Inc., which voluntarily recalled multiple products containing the celery.