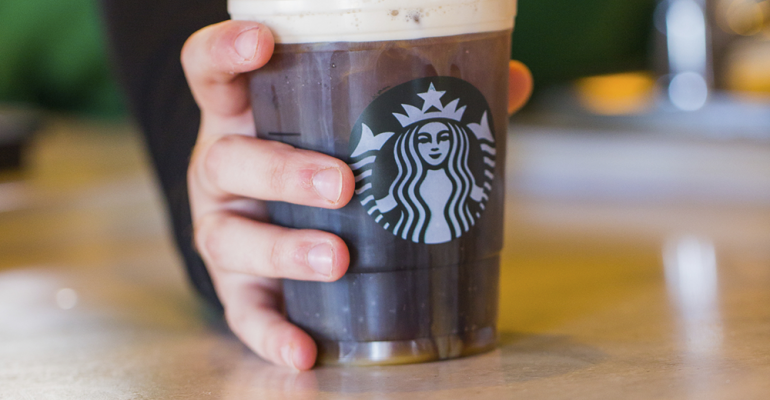 As Starbucks customers get younger, its sales continue to skyrocket

Starbucks’ customized beverages business reached $1 billion in 2022, largely driven by Millennials and Gen Z, and especially when it comes to iced and specialty holiday offerings

The Gen. Z customer ordering a customized iced Starbucks drink (preferably fall or holiday-themed) isn’t just sharing her drink on social media: she’s also sharing the wealth. Starbucks’ boom of 7% same-store sales growth and 3% revenue growth for the quarter ended Oct. 2. has a lot to do with its younger customer base, and the growth of customized, iced beverage platforms.

Starbucks is seeing big results as its customer base gets younger and keeps ordering personalized drinks — whether a secret menu concoction or simply swapping out for plant-based milk — as the Seattle-based coffee giant’s customization business reached $1 billion or more than 60% of beverage sales, in 2022.  The company is also leaning heavily on its cold beverage platform — which now represents more than 75% of the U.S. business — and holiday beverages from Sept.-Dec., which again, mostly resonate with younger customers.

Related: Starbucks is opening a Reserve store inside the Empire State Building

“There is no other coffee company anywhere in the world that has our ability to respond instantaneously to a customer's request about customization,” Starbucks interim CEO Howard Schultz said during Thursday’s earnings call. “There isn't a coffee company that has our ability behind the counter in terms of flavors, syrups, modifiers, foam, etc., to provide the customer what they want. I think cold is in its early stages in terms of what's coming. And the innovation we have around cold through the year will continue to drive awareness and attachment.”

In fact, Starbucks’ beverages have been so wildly successful, that they had to do a menu culling a few weeks because “we knew we couldn’t handle it” that there were “just too many beverages we felt good about.”

In addition to leveraging the marketing power of an army of iced coffee-drinking “Zoomers” posting their customized drinks on TikTok, Starbucks has ramped up the scope and scale of its development plans. International markets (outside of China) and licensed stores in particular have been seeing bump-ups in success.

Over the next three years, Schultz said that the company’s goal is to open eight new stores per day (around 8,000 stores) to bring the total store base up to 45,000 by the end of 2025, which would include new types of store formats from to-go stores, to the new three-floor Starbucks Reserve store opening up in the Empire State Building.

Besides physical development, Starbucks is also optimistic about digital growth, especially with the Starbucks Odyssey metaverse on the horizon. In 2022, Starbucks grew its loyalty base by 16% year-over-year, and the mobile order & pay option surpassed 26% of orders in Q4 for the first time ever.

While it appears that the continued threat of unionization doesn’t seem to have made a dent in Starbucks’ quarter-end and year-end success, what challenges does Starbucks see on the horizon? Related to unions, Starbucks wants to continue to improve the in-store experience and efficiencies both for the customer and employee and make the beverage-creation process easier and faster with new equipment, as previously announced at Starbucks Investor Day.

“This equipment collectively supports improvement in our throughput during both peak and full day, while providing the foundation to support elevated partner and customer experiences as we further reinvention plan investments and productivity,” Sara Trilling ,executive vice president and president of Starbucks North America said. “The rollouts [for this new equipment] will be completed by fiscal year '23 for our company-operated stores. Additionally, we rolled out nearly 60% of our handheld point-of-sale investments to nearly 75% of our cold beverage labelers. Handheld POS is already helping us capture new and latent demand in support of our ambitious revenue expectations.”

Starbucks is also looking to improve traffic, which is still not quite up to pre-pandemic levels, despite the company’s continued success.