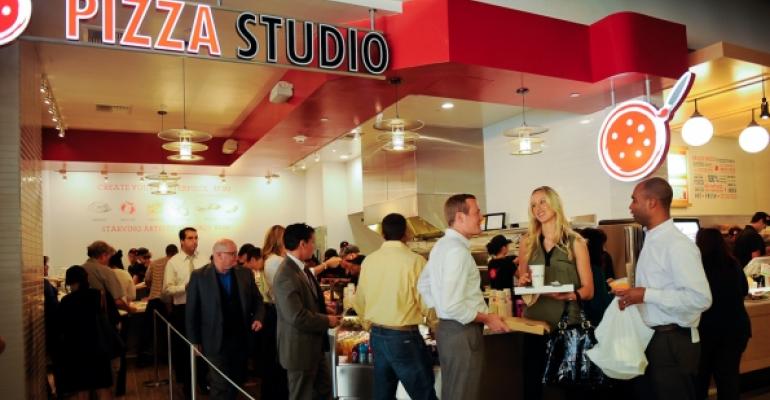 Deal to open door for growth in nontraditional locations

Terms of the deal were not disclosed, but Thompson will hold a minority stake in the Calabasas, Calif.-based pizza chain as a result, said Samit Varma, Pizza Studio co-founder and co-CEO.

As part of the deal, Thompson has also committed to opening 80 Pizza Studio locations, including 40 in the Washington, D.C., area and another 40 on college campuses, airports, hospitals and other nontraditional locations, mostly in the Eastern U.S.

Thompson Hospitality is the seventh largest foodservice company in the U.S., with a diverse mix of institutional accounts in 46 states and internationally, Thompson said. The firm also has a strategic partnership with global foodservice giant Compass Group.

Although the firm is also a Pizza Hut franchisee on some college campuses, Thompson said the investment brings a fast-casual pizza brand into the company’s portfolio.

After looking to invest in the right fast-casual pizza brand for about five years, Thompson said he was impressed by the vision of Pizza Studio’s founders.

“The balance of quality and ease of execution made it something we really wanted to do,” Thompson said. “This format of pizza will work very well in airports because of the speed of delivery, the simplicity of it, and the fact that it allows customers to have it their way.”

The move into nontraditional locations could offer a significant boost for Pizza Studio, which, with 33 units, is racing to catch up to larger players within the rapidly growing fast-casual pizza space, where chains like Blaze Pizza, Pieology and MOD Pizza are nearing the 100-unit mark.

Pizza Studio, however, has the advantage of using a ventless conveyor oven, which gives the brand more flexibility in location, Varma said.

The ovens also cook the thin-crust pizzas in minutes, allowing for fast throughput and a more consistent product, he said.

“In environments where there is a large lunch rush, like college campuses and airports, we perform very well,” Varma said.

Unlike most others, however, customers can choose from among several crust flavors, from rosemary herb to the spicy “firecracker,” as well as choosing sauces, toppings and cheeses.

The chain plans to “make a big splash” on college campuses in particular, where the brand will join dining hall options alongside nationally recognized brands like Chick-fil-A, he said. “This will be a great introduction of our brand to a large audience.”

Within the next six months, the brand will open on five or six campuses, probably in Maryland, Varma said. Pizza Studio already has a location near Johns Hopkins University in Baltimore, so the brand will be familiar there, he said.

Currently, Pizza Studio is in some mall locations and can go as small as 200 square feet as a kiosk. One of the chain’s smallest units in a downtown Los Angeles food court is about 750 square feet, including back of the house and queue line, and averages more than $1 million in annual sales, Varma said.

This year, Pizza Studio has three more units scheduled to open, with another 60 on deck for 2016. Of the 33 units open, seven are company owned, he said.