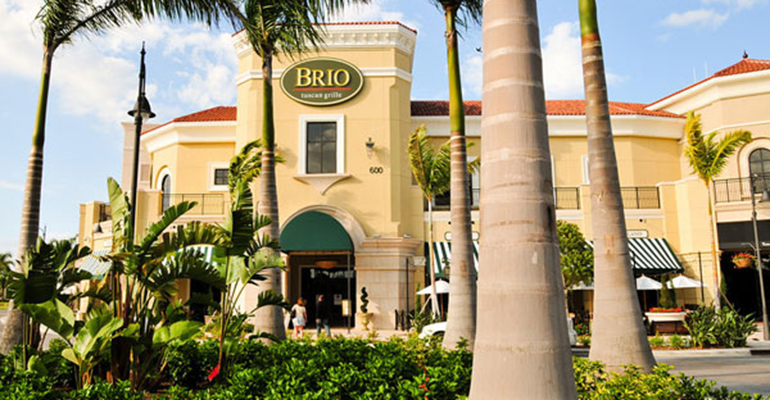 Only 21 of 53 Bravo/Brio locations are still operating.
Finance

An affiliate of Earl Enterprises, parent of Buca di Beppo and Earl of Sandwich, is seeking to buy at least 45 Bravo Cucina Italian and Brio Tuscan Grille restaurants.

Bravo/Brio parent company FoodFirst Global Restaurants was seeking a buyer for the sturggling casual-dining brands prior to filing for Chapter 11 bankruptcy protection in early April. Amid the COVID-19 crisis, the company permanently closed or “rejected" 48 of the company’s nearly 100 locations, according to the latest bankruptcy document.

The company now has 53 locations left. Of those, 21 are operating. At least 45 of those locations are being purchased by GPEE Lender LLC, an affiliate Earl Enterprises in Orlando, Fla.

According to a May 26 bankruptcy filing, the purchase price includes $25 million to be credited against the debt owed by the seller to the buyer, plus $50,000 in cash and $4.5 million in assumed liabilities.

The buyer said it is “still examining the various unexpired leases it will seek to assume and assign; however, it has committed to assume at least [45] of the existing nonresidential real property leases,” the filing stated.

The proposed sale comes after Orlando-based FoodFirst filed for Chapter 11 bankruptcy protection in early April. The company’s two brands had been struggling for months prior to the coronavirus outbreak. Steve Layt came on board as CEO in late January to fix the brands.

According to the bankruptcy filing and Layt, the pandemic escalated the company’s already precarious position. The company was in distress due to elevated food costs, labor pressure and the drag of unprofitable locations.

When the pandemic started, Layt told Nation’s Restaurant News that he kept only the best performing restaurants open for takeout and delivery. Since then, “we have experienced nothing short of devastating sales declines,” he said at the time. “The COVID-19 outbreak truly could not have come at a worse time for our business.”

The bankruptcy comes two years after Bravo Brio Restaurant Group Inc. went private in a May 2018 deal valued at $100 million. The Columbus, Ohio-based company, which changed its name to FoodFirst, relocated its headquarters from Ohio to Florida. At the time of the purchase, Brio and Bravo operated 110 locations in 32 states with annual sales of more than $400 million in fiscal year 2017.

FoodFirst tried to reboot the brand, which had been struggling in a post-Great Recession world as consumer preferences changed.

The changes made by FoodFirst included enhancing the menu with Italian Mediterranean inspired foods, pursuing operational efficiencies and remodeling restaurants.

The strategies “were expected to significantly enhance profitability. Unfortunately, the changes did not yield the results expected,” according to the initial bankruptcy filing.