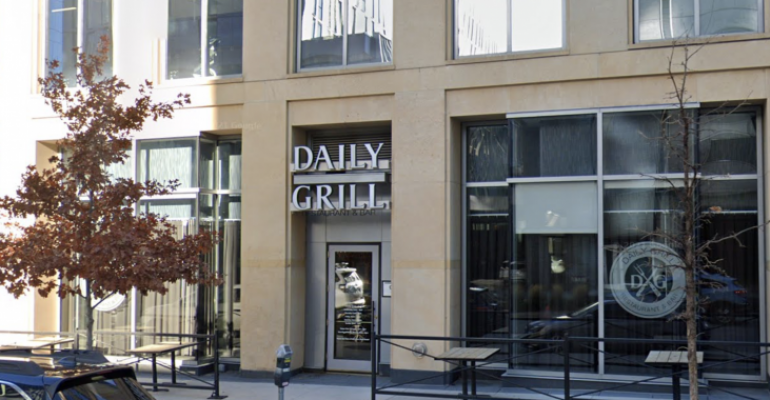 Google Maps
The Daily Grill. location in Denver is temporarily closed, though court documents indicate the company has rejected the lease among underperforming locations.
Finance

Grill Concepts Inc., which currently operates 14 restaurants including six units under the Public School gastropub brand, along with seven of the legacy Daily Grill restaurants and one luxury steakhouse Grill on the Alley, filed bankruptcy on April 28 in the U.S. Bankruptcy Court of the Central District California, San Fernando Valley Division. The company also manages three restaurants in management agreements with various hotels.

In a reorganization plan filed as part of court documents, the company said it has implemented “drastic cost-cutting measures to safeguard and maintain its business operations.” Grill Concepts has closed 14 restaurants, though the company plans to reopen some as market conditions improve.

It’s unclear how many have closed permanently and which brand. A spokesperson for the company said the status of certain locations remains tentative.

Court documents indicate the company rejected leases from underperforming locations, including units in Adventura, Fla. (Grill on the Alley); Denver (both Daily Grill and Public School); and Santa Monica (Daily Grill) and Studio City (the one-off Laurel Point)  in the Los Angeles area.

Two other Grill on the Alley units — including the original location in Beverly Hills, and one in Westlake Village, both in California — were reportedly sold to a separate entity called BH White Corp. in 2019, and those locations remain open.

Claude Cognian, Grill Concepts' CEO and president, said in a statement to employees that "the pressures that COVID-19 had on our world and our economy has been extreme and, indeed, unprecedented. Against this backdrop, Grill Concepts Inc. took a major steop to strengthen our liquidity and reduce debt by voluntarily filing for Chapter 11 (reorganization) protection for our entities. This was a difficult decision, but it is the right path forward for Grill Concepts Inc. A U.S. Chapter 11 filing is designed to serve as the means to a new beginning and preserve the jobs of our team members — and that is exactly our intent."

Grill Concepts was founded more than 30 years ago by Bob Spivak with partners Mike Weinstock and Dick Shapiro, who first opened the original Grill on the Alley in Beverly Hills, once a Hollywood power lunch spot. Spivak has retired, but in one of the court filings, he was listed as one of the top unsecured creditors with a claim of $150,000.

Operated for years as a publicly traded company as it grew the more-casual Daily Grill brand, investors took Grill Concepts private in 2008. In 2012, the company launched the craft-beer-oriented Public School brand as a concept for the 21st Century.

UPDATED: This story has been updated with new information from Grill Concepts Inc.