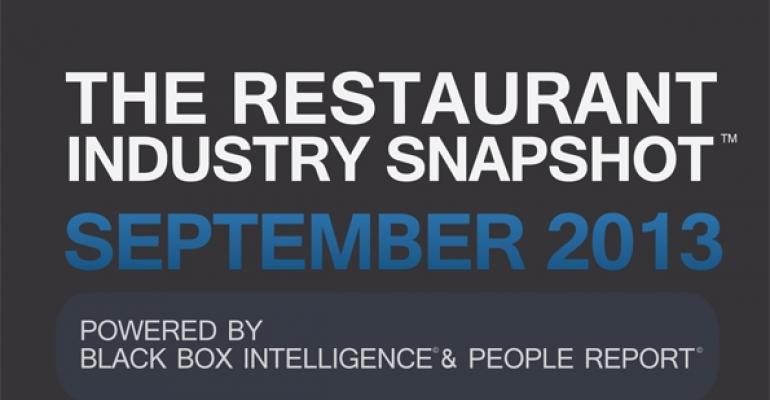 Despite a slight improvement during September, restaurant same-store sales for the third quarter again fell into negative territory, suggesting that the industry is far from sustained, healthy growth.

September’s Restaurant Industry Snapshot from Black Box Intelligence and People Report showed that same-store sales rose 0.1 percent for September. That’s a 0.2-percent improvement compared to August and the first month since May in which same-store sales were positive for the restaurant industry. For the entire third quarter, however, same-store sales fell 0.2 percent, a 0.6-percent decline compared to second-quarter results.

“The latest quarterly results highlight how the last year has been very tough for the industry, with three of the last four quarters showing a decrease in same-store sales,” commented Victor Fernandez, executive director of insights and knowledge for Black Box Intelligence and People Report. “The problem continues to be rooted in traffic, with a continuously diminishing number of restaurant visits compared with the numbers seen in previous years.”

“Although guest counts continue to drop, there is some encouraging news in the fact that the third quarter was the second consecutive quarter in which traffic growth showed some improvement from the previous quarter,” said Fernandez. “The last time we saw two consecutive quarters of improvement was in the first quarter of 2012.”

The improvement in the sales and traffic metrics seen during September comes on the heels of the strengthening consumer outlook in recent months. The Restaurant Willingness to Spend Index released last week by Consumer Edge Research, a partner company to Black Box Intelligence and People Report, reported a value of 92 for September.

“This was the third consecutive month with a value above 90 for this index, which we had not seen since the end of 2010,” said Fernandez. However, the value for September does show a slight decrease from the 93 reported for August, predicting that September might reverse course to declining results in both same-store sales and traffic, particularly with the government shutdown and impending debt ceiling deadline.

“A positive indicator for the consumer, nevertheless, has been the declining gas prices across the country,” he continued. “In spite of high consumer sentiment and favorable energy prices we don’t see these factors or any others impacting sales and traffic for restaurants in a significant way.”

From a regional standpoint, the Western region again reported the best performance in September with 1.7-percent growth in same-store sales and a 0.5-percent decline in traffic. For the fifth consecutive month the worst regional performance came from the Mid-Atlantic, with same-store sales decline of 1.6 percent and a 3.7-percent decline in traffic.

The overall improvement in same-store sales seen at the national level also translated into improvements at the individual market level; 99 of the 182 DMAs covered by Black Box Intelligence posted positive growth in comparable stores during September, increasing from only 83 DMAs reporting positive sales growth the previous month.

Although year-to-date job turnover rates leading up to August have increased when compared to 2012, the latest month’s results produced a slight decrease in the rolling 12-month rate. In terms of job creation by the industry, head counts were estimated to have increased by 1.1 percent year-over-year during August. This represents a small drop from the 1.4-percent annual job growth rate reported for both June and July.