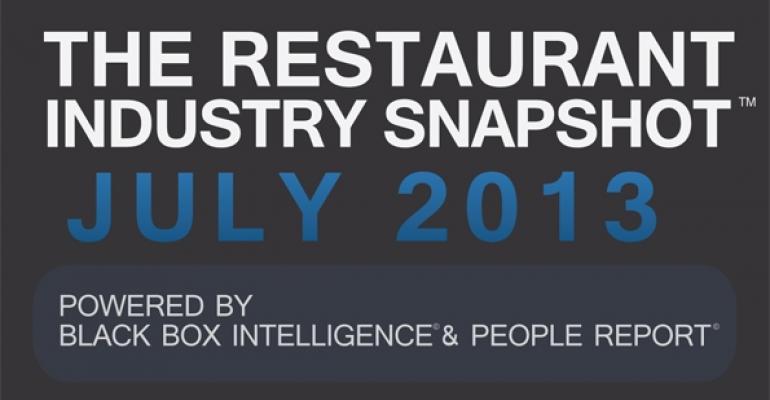 Black Box Intelligence and People Report released the Restaurant Industry Snapshot for July this week, which showed the second straight month of sales declines this summer.

Restaurant same-store sales decreased 0.9 percent in July, continuing to fall from flat sales in June and a 0.8-percent increase in May. Same-store traffic declined 2.2 percent, slightly better than the 2.5-percent decline in June.

However, consumer outlook has improved despite falling sales. Consumer Edge Research, a partner company to People Report and Black Box Intelligence, released the Restaurant Willingness to Spend Index last week with a value of 93 for July, which is a marked increase over the index score of 85 reported in June and the highest score observed in 2013. Based on historical data gathered through the partnership, this increase in the index score would typically suggest a slightly higher Black Box Intelligence same-store sales rate in the month of August compared to July.

“Sales have continued to weaken this summer, which is a bit disappointing after experiencing a string of consecutive positive sales months this spring,” said Bill Schaffler, president at Black Box Intelligence and People Report. “On a positive note, we are encouraged to see the consumer is indicating a heightened willingness to spend in restaurants as compared to the same month one year ago. We are hopeful that will translate into a stronger sales result in August.”

The New England region performed the best in July with a 1.6-percent increase in same-store sales, while the Mid Atlantic region was the lowest performing area with a same-store sales decrease of 3.7 percent. Additionally, 50 out of 182 DMAs posted a positive result in July, down from 82 in June.