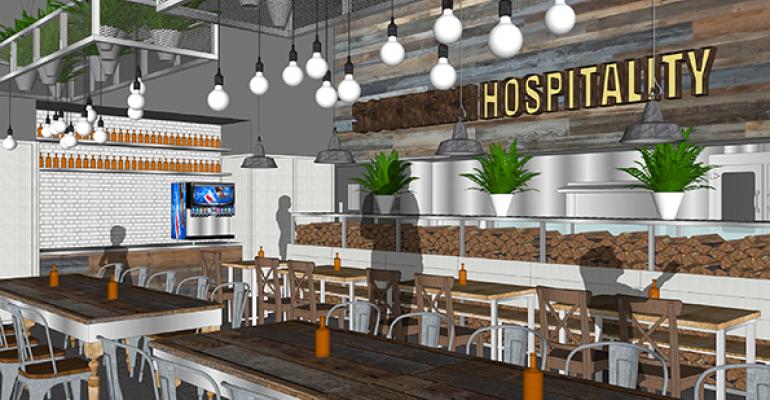 Justin Timberlake has no shortage of female fans, and the management of the barbecue concept that the musical entertainer helped develop is also working to attract women as it shifts its service format from full service to fast casual.

“There’s a huge focus for us on females aged 24 to 39,” said Mitch Roth, president of Southern Concepts Restaurant Group Inc., based in Colorado Springs, Colo. “There have been some studies that would suggest that 49 percent of all fast-casual consumers are in that demographic.”

Southern Concepts is the licensee of Southern Hospitality, a Tennessee-style barbecue restaurant founded in New York City by restaurateur Eytan Sugarman, who credits his friend Justin Timberlake, a Memphis native, with conceptualizing the restaurant.

“Fast casual has led the industry in growth over the past five years. It’s obviously where the industry’s going,” said Roth, who noted that young professionals such as himself, who grew up eating out, are looking for high-quality food at a reasonable price that they don’t have to cook and can take back to the office if they’re working long hours.

Roth has retained Roth Sheppard Architects, no relation, to design the restaurants. That firm also designed fast-casual concepts Modmarket and Tokyo Joe’s. Roth is looking for real estate where he can build 2,000-square-foot to 2,500-square-foot units. He has signed his first lease in central Denver, near the intersection of Colorado Boulevard and Mississippi Avenue, and hopes to open in July.

“We don’t want to be known as the kind of sloppy barbecue with the pig on the door,” he said, emphasizing the importance of female customers. “We want very much to talk about how barbecue is a very good alternative to Chipotle or Noodles & Company if you’re trying to stay away from the carbs, if you’re trying to eat a paleo diet or an Atkins diet. It’s a very substantial, protein-centric meal.”

Another point of differentiation: The restaurant will only serve all-natural protein raised in Colorado, at least at the first few units.

“We’re fairly lucky because we’re in cattle country, and we have an investor that has, like, 16,000 acres of eastern Colorado grassland, so we’re able to reach out to some of those sources and provide really high-quality meats.”

Guests will be able to order a variety of proteins, likely including brisket, pulled pork, turkey, one or two kinds of sausage — possibly a hot link and a kielbasa — chicken and smoked tofu. They can be ordered “naked,” just on a plate, on a bun, as a taco with coleslaw and hot sauce, or as a salad.

He anticipates an average check in the $10 to $12 range, although, given the high price of beef, he’s considering offering the brisket at a floating market price, allowing him flexibility and raising awareness to customers of high beef prices.

Although Roth is targeting women, he expects a solid male customer base, too.

“It’s not dude food, but I do think that if we have really great brisket and pulled pork sandwiches, the dudes will come," he said.

Roth, unlike many aspiring fast-casual operators, doesn’t describe his vision as creating the next Chipotle, but rather following the strategy Chipotle’s management is taking with Pizzeria Locale.

“Chipotle came in and made a significant investment in Pizzeria Locale, which is a full-service pizza restaurant up in Boulder — the type of restaurant where you go with a group of people, you get a bottle of wine and you eat a pizza. Chipotle’s expertise is in fast-casual, and in scaling restaurants and using purchasing power. They took the brand that is Pizzeria Locale, and they developed a prototype fast-casual unit,” he said.

There are now two fast-casual locations of Pizzeria Locale in Denver. Roth said he hopes to use the goodwill that Southern Hospitality has established in Denver over the past two years to help it expand in the area.

“We think we’ve got the brand awareness to successfully roll out five or six of them in the Colorado market, and we’re very excited about it,” he said.