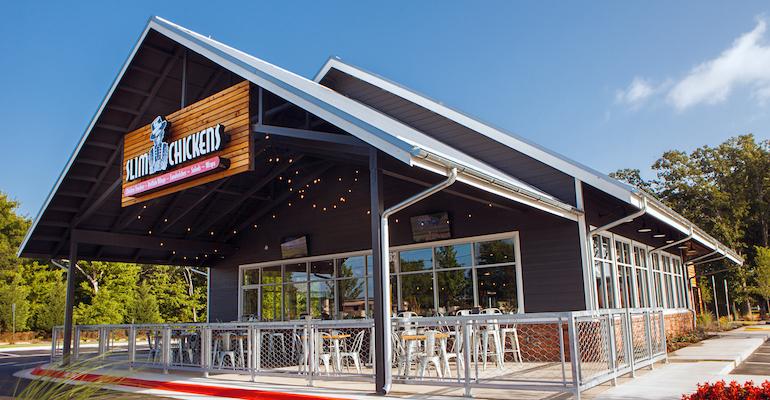 The Fayetteville, Ark.-based Slim Chickens said the investment by Atlanta-based 10 Point Capital would finance the brand’s continued growth. Terms of the deal were not disclosed.

Slim Chickens, which launched in 2003, has locations in 14 states, the United Kingdom and Kuwait. It serves a menu of chicken tenders and wings cooked to order and served with house-made dipping sauces.

"Greg Smart and I started Slim Chickens over 16 years ago with a mission to bring Southern hospitality and fresh, high-quality chicken to a fast-casual setting," said Tom Gordon, the company’s co-founder and CEO, in a statement. "Our growth with new franchise agreements has been exceptional in the first half of 2019. In the past quarter alone, Slim Chickens has signed 60 new restaurant agreements with impressive, experienced multi-unit franchisees.

“With 10 Point Capital's unique support and expertise,” Gordon continued, “we believe we have the resources necessary to achieve our goal of 600 stores in the next 10 years."

Slim Chickens said it opened its fourth U.K. location in Birmingham, England, earlier in July and will open new restaurants in Southaven, Miss., and Owasso, Okla., in the next several weeks.

"Whether in Little Rock, Arkansas or Central London, we found in our diligence that Slim Chickens has quickly established a loyal following in whatever market it enters,” Wells said.

Seth Jensen, Slim Chickens chief financial officer, said the company was looking for an equity investment that would impact more than financing. "Ultimately, we chose 10 Point Capital due to their expertise in franchising and the shared vision for the brand,” Jensen said.