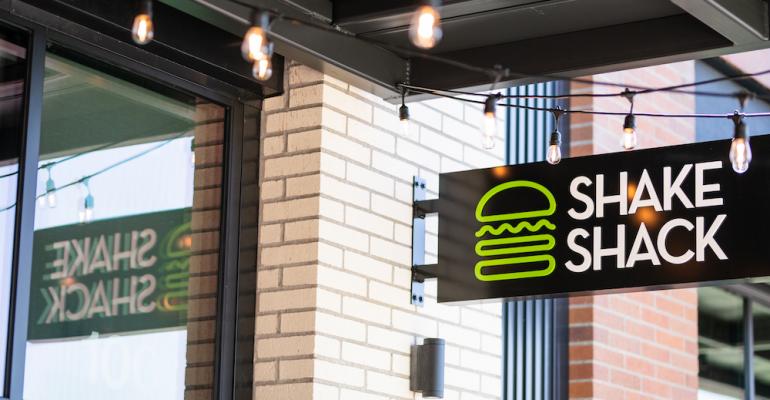 This will be the second price hike of the year, as Shake Shack took a similar increase in March. It also raised prices last October.
News>Fast Casual

Shake Shack to raise prices in fourth quarter, the second increase of the year

Expansion continues as the chain opens its 400th restaurant

Faced with continued increases in the cost of doing business, particularly with higher prices for its crinkle-cut fries, but also buns, dairy and chicken, Shake Shack executives said they would raise prices by between 5% and 7% in the mid-4th quarter of 2022.

This will be the second price hike of the year, as the chain took a similar increase in March. It also raised prices last October.

“In the last year we’ve had two different price raises in the 6% to 7% range. In addition we’ve added some additional price on our 3rd-party-delivery channels [currently a 15% surcharge].”

Related: Digital innovation brings Shake Shack back from the brink

He said the upcoming increase is the minimum that the chain needs to implement in the face of higher costs.

Garutti added that the chain met little resistance from customers to the March price increase and that Shake Shack remained competitive with other fast-casual and better-burger chains.

“Obviously we’re going to be more than traditional fast food, and we should be,” he said, given the high quality of ingredients Shake Shack uses.

Despite higher costs, and challenges in opening new restaurants due to supply chain issues, the New York City-based chain had a robust quarter with same-store sales up by 10.1% compared to the 2nd quarter of 2022, and an average restaurant-level profit margin of 18.8%. Traffic grew by 7.8%, mostly driven by in-restaurant sales.

“With more guests wanting to gather, you can feel the increased energy in our Shacks, which has always been a competitive advantage for us,” Garutti said.

Reflecting what many chains have reported this quarter, Shake Shack saw strong sales growth through mid-May, but that began to “level off” in June, Garutti said, “clearly related to a pullback in mobility, a muted return-to-office trend, and some caution on the part of the lower-income consumer.”

He said July traffic appears to have been on-trend, however.

Garutti said the availability of certain HVAC, switch gear and kitchen equipment has affected the company’s ability to open new restaurants, but said they were on track to open 20-25 company-owned restaurants in the 4th quarter, mostly toward the end of that quarter, plus 25-30 licensed ones, giving them a total of 60-70 new restaurants opening this year.

“That’s a big number of restaurants for a company that only has 400 in total today,” Garutti said, citing the number of restaurants as of August 3. It ended the quarter with 395 locations systemwide, of which 230 are company-owned and 165 are licensed (27 in the United States and 138 elsewhere).

Although Shake Shack only has a few drive-thru locations, “we’ve optimized these investments for learning, testing various markets, building and kitchen designs and how we flow through the kitchen,” he said. Average weekly sales at those restaurants for the past four months have trended at more than $80,000, higher than other suburban units, with roughly 50% of sales occurring through the drive-thru.

He added that, while the chain remains committed to urban locations and will continue to open restaurants in the middle of big cities, suburban restaurants will account for the majority of locations as of 2023.

Garutti said that in Midtown Manhattan, where Shake Shack is based and where restaurants have been heavily impacted by the pandemic and associated restrictions, traffic for weekday lunch and dinner is still down by more than 40% compared to 2019.

Also during the quarter Shake Shack began testing its new technological capabilities on its app by marketing for a specific daypart, namely the 2 p.m. to 5 p.m. “happy hour” period on weekdays for which it offered a buy one, get one deal for shakes during that period.

“Our Shacks are very busy at lunch and dinner, however we view this midday as underutilized from a staffing perspective and are excited about the early read of the incrementality of this offer,” chief financial officer Katherine Fogerty told investors. “It’s driving digital frequency and app downloads and, as an added plus, many of our guests are coming in for the Shake Shack happy hour and getting other items as well.”

“We feel really good about incrementality that can be driven by this,” he said.

The chain is also expanded use of ordering kiosks and Fogerty said the chain planned to have them operating in most locations by the end of next year.