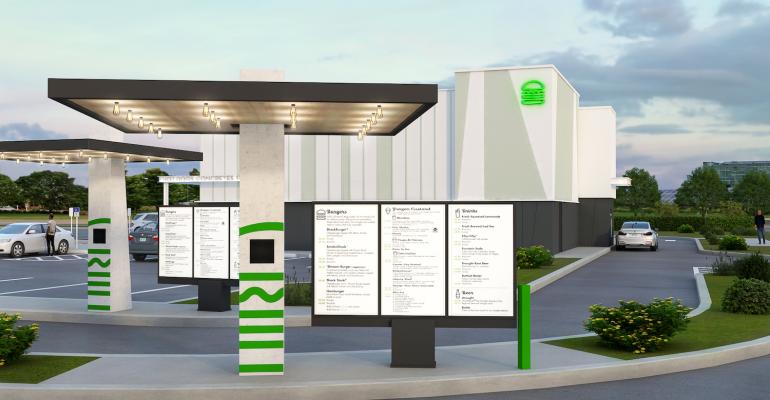 As Shake Shack continues its recovery from the pandemic, the New York City-based fast-casual burger chain is working to meet customers wherever they want them to be by investing in customers’ digital experience and opening more drive-thru locations, company executives said in an earnings call on Thursday.

“We remain committed to our digital transformation and we're ramping up investment in every digital channel,” CEO Randy Garutti said. “Through the Shack Track digital experience, whether you want your Shack [food and drinks] in our app, web, kiosk, drive-up, curbside, delivery and now drive-thru, we're building tools to add even greater convenience to the omnichannel Shack experience.”

He said sales at the chain, though stymied in January and February due to the surge of the omicron variant of the novel coronavirus, recovered in March, and for the quarter ended March 30, 2022, same-store sales were up by 10.3% compared to the first quarter of 2021.

Recover continued in April he added.

Garutti said in-store dining was up by more than 50% at like-for-like restaurants compared to last year, “but our digital sales [are] still holding [steady], and our percentage of total sales that is digital [is] still holding even as in-Shack [business] continues to grow, and that's a really encouraging sign for where we believe the businesses is headed.”

The chain now has five drive-thru locations, with plans to open at least one more during the current quarter and a total of five more by the end of the year.

He said that drive-thru restaurants cost more to build than traditional units, with the hope that they would have higher sales, but he acknowledged that they weren’t yet sure average unit volumes actually will be higher at restaurants with drive-thru windows.

However he did see potential for drive-thru locations to help the chain capture more market share.

“Ultimately, the thing we're really after is increasing the potential addressable market for Shake Shack,” he said. “We believe drive-thrus can give us a new look at the way we can think about sites, think about sales capture and really our ability to capture as much share in a market of the burgers that are available to sell there.”

Chief financial officer Katherine Fogerty said Shake Shack customers were showing more interest in engaging with the chain digitally, and said that when they did so they often spent more money.

“What we're really excited about, and where we're investing, is helping that [digital] guest really understand our menu,” she said, adding that digital customers on average spend more than 25% more than analog customers.

Digital customers also buy from Shake Shack more often, she said, “and also we're starting to see more and more guests come into the digital channel through various ways — if it's in-shack or maybe they're going to kiosks — and then we're getting them to download the app.”

There are currently 386 Shake Shack restaurant globally, including 255 in the United States, of which 228 are company-owned and 27 are licensed.

Fogerty said that for the second quarter she anticipated revenue of $233.8-$239.5 million with a profit margin of 16%-18%. She expected six new company-owned restaurants to open and expects same-store sales in the low- to mid-teens.