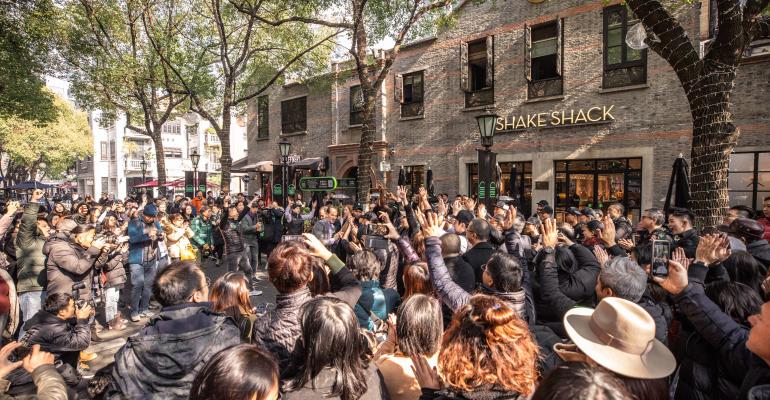 Shake Shack
New restaurants slated for Beijing and Macau will double the brand’s presence in China this year.
News>Fast Casual

Units in Beijing and Macau will double the brand’s presence this year when they open.

Shake Shack has returned to unit growth, opening four domestic locations during the pandemic. But the big spurt is happening overseas.

The New York City burger chain said it is “firing up” its growth in China with plans to open 55 restaurants by 2030.

Maxim currently operates Shake Shack locations in Shanghai and Hong Kong. Two more restaurants, one in Beijing and the other in Macau, are slated to open later this year.

“It’s a great time to deepen our roots in this market,” said Michael Kark, chief global licensing officer of Shake Shack, said in a statement. “This is a significant step in our relationship with Maxim’s as we partner to achieve 55 Shacks across mainland China by 2030.”

Michael Wu, chairman and managing director of Maxim's Caterers Limited, said the company’s partnership with Shake Shack “has taken the brand on an exciting journey” with the previous openings in Hong Kong (2018) and Shanghai (2019).

“We look forward to bringing our boundless hospitality to more guests across South China in 2021 with our new expansion plans,” Wu said in a statement.

Earlier this month, Shake Shack CEO Randy Garutti said the company is “starting to get back on the development schedule.”

However, he did not offer guidance on store development, only stating that new growth would be far fewer than the initial 40 company stores planned for 2020.

In its latest quarter, Shake Shack reported a 12.8% drop in same-store sales, driven primarily by a 29% plunge in growth in March.