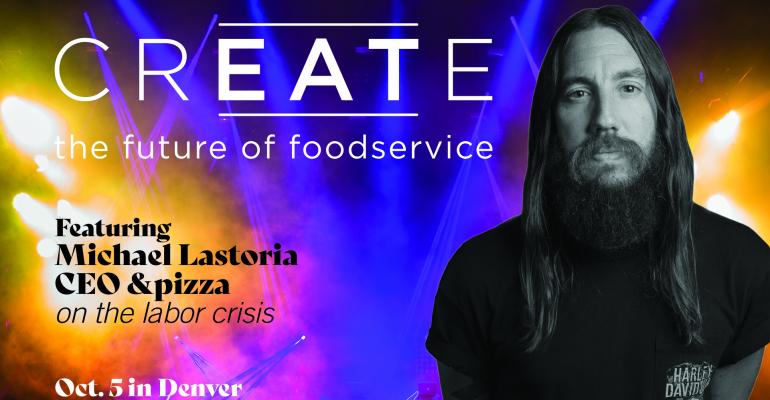 Michael Lastoria, cofounder and CEO of fast-casual pizza chain &pizza, has become an advocate for better wages and a better culture for restaurant workers, and offers his tips for solving the labor crisis.
News>Fast Casual

Labor is the No. 1 challenge facing restaurant operators today. Following the massive disruption of the COVID-19 pandemic, brands have struggled to adequately staff their restaurants as workers have exited the industry and balked at returning for low wages and an increasingly stressful work environment. Michael Lastoria, cofounder and CEO of fast-casual pizza chain &pizza, has become an advocate for better wages and a better culture for restaurant workers, and offers his tips for solving the labor crisis.

Join us in Denver Oct. 4-6 for CREATE: The Future of Foodservice, where Lastoria will share more on his advocacy and labor strategy.

How has the industry gotten to this point where it’s having a labor crisis?

Everyone knows that the industry has always had labor challenges. I think what this pandemic did is it created a pretty significant exodus of workers that decided with perspective, right in the middle of a global pandemic, that the juice wasn't worth the squeeze, that the wages they would be earning, the way they were being treated by their employer and the general atmosphere that a lot of restaurants created wasn't healthy.

And so when we talk about progressive policy, my biggest hope is that it's no longer considered to be progressive to take care of your workers, to pay them a living wage, to put them on the same pay scale of someone doing a similarly skilled job and that we can create and re-create job positions and structures where you're seeing significantly more income be spread like peanut butter across the organization.

Pay has become such a lightning rod for this labor conversation. What’s going to encourage operators to pay a living wage?

I've been preaching for the last 10 years the importance of getting to what we believe to be as close to a living wage as possible, which is $15 an hour. The problem now is that ship has sailed. If you're not on a path to paying $15 an hour, you will be faced with this so-called labor shortage. … And by the way, retail is already there. It's very easy for someone to leave restaurants, join retail and make $16-$18 an hour. Whether they have poor working conditions or not, at least the wages are there. And so now I would figure out how you're going to get up to $15 an hour and then think about all of the benefits that are authentic to you as an employer, that make them feel appreciated, supported and engaged.

For &pizza, there are two things that come to mind: One is our transportation partnership with Lyft, where we subsidized a rideshare program for people to get from where they live to where they work. And that's a big deal for a lot of these kids who are taking public transportation. Second to that is paid time off for activism. It’s a huge driver because people can go to protests, go to marches and feel like their voice is being heard.

What are the lessons the industry should learn from this crisis?

I think the lessons are the status quo is not going to drive us into the future. We are going to continue to see greater and greater numbers of people leaving the foodservice industry, leaving the restaurant industry, and that's unfortunate because 10% of America's workforce is in the restaurant industry, the second largest employer behind the federal government. The first thing is to raise your hand and admit and acknowledge the fact that maybe we got this wrong, and that’s OK. Let’s start to really, as a community, organize around what that looks like instead of fighting minimum wages, instead of pushing back against the inevitable; let's embrace it and look for things that we can offer that no other industry can offer. You can solve for it as an organization, but you need to solve for it as an industry.