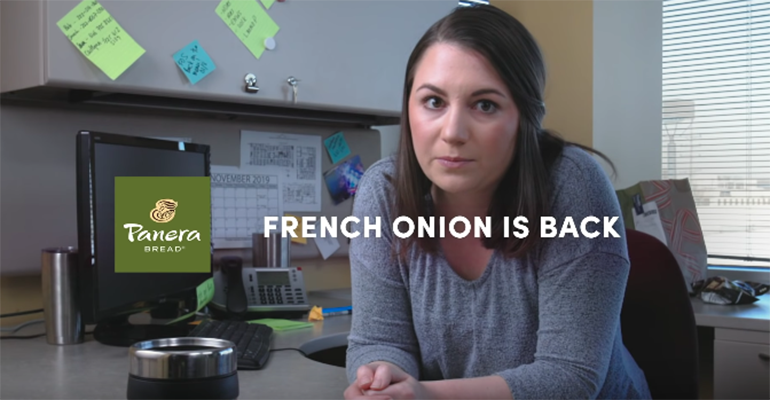 Panera Bread is working to regain customers’ loyalty in 2020 with the reintroduction of its fan-favorite French Onion Soup.

2019 was a year of food news for Panera, not all of it positive. First, it removed the French Onion Soup, a staple on the menu for over 20 years, to make room for seasonal menu items in June. Then, it was revealed the brand was heating up frozen dishes.

Yo @panerabread when the F is the French onion soup coming back? We never needed Autumn squash. Just bring the onion back, man. PLEASE. I NEED IT. I NEED THE ONION SOUP. pic.twitter.com/WwLcX72V81

In a change from their previous social media reactions to public outcry, the St. Louis-based bakery-café chain decided to take action and hire a celebrity.

The brand tapped St. Louis native Phyllis Smith, known for her work on television show “The Office,” as the star of its new ad campaign where she responds to negative social media posts.

“The internet was sad when we took [French Onion Soup] away, but we heard you,” Scott Nelson, Panera’s VP of marketing, said in a statement. “Now, with the help of our friend and St. Louis native, Phyllis, we’re announcing French Onion Soup is back at Panera.”

Smith sits at a cubicle in the company headquarters reading expletive-filled tweets directly off the screen. Acting as the new customer-service representative, she appears shocked at the impact the menu change had on people.

Shots of the company’s social media manager, Boo Detch, start and end the video. She sits at her desk and explains the need for more social media help after the unexpected backlash, which is where Smith comes in.

The video finishes with Detch looking at camera and saying, “Please stop messaging us.”

When I hear French onion soup is returning to Panera pic.twitter.com/GwJBNgg6tZ