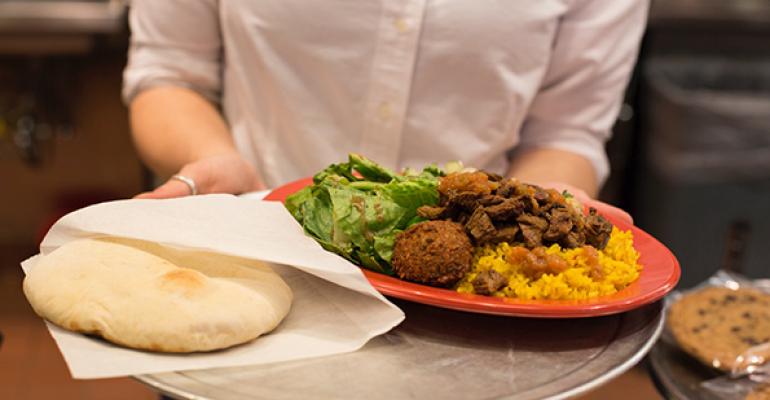 It’s the second rebranding for the 22-unit chain in less than a year.

In 2015, the Denver-based concept made the leap from Garbanzo Mediterranean Grill to Garbanzo Fresh Mediterranean, which was part of a larger effort to modernize the brand.

That, however, was before the chain brought in James Park as CEO, the former vice president of marketing and research and development for Which ‘Wich. Park joined Garbanzo in December 2015.

Park outlined plans for Garbanzo that will include yet another name change, this time to Garbanzo Mediterranean Fresh.

The tweak is part of a more comprehensive turnaround effort in the works following a few years of transition for Garbanzo.

After winning an equity investment from private-equity firm Gemini Investors in 2012, Garbanzo founder and former president and CEO Alon Mor quietly exited the company in 2014.

Now a majority stake is held by Gemini along with Michael Staenberg of St. Louis-based real estate firm The Staenberg Group. Staenberg is also an investor in the Granite City Food & Brewery concept, a press spokesman for Garbanzo said.

Park described Garbanzo as a chain that had great early success, but then hit a period of growing pains.

The chain’s 17 company locations have seen negative sales over the past four years, though the five franchised locations are doing well, with double-digit sales increases year-over-year in 2015.

“It’s common for brands that hit it out of the gate to have a tendency to fly too close to the sun,” Park said. “Some of the decisions made weren’t the best for the organization.”

Now Park is aiming for a course correction.

The new name is designed to allow for more menu flexibility, including the addition of fresh ingredients that may not be traditionally Mediterranean, like avocados, Park said.

The former tagline “Bold, Fresh, Healthy” will be replaced with “Simple Tastes Better,” he said.

Garbanzo’s menu continues to be focused on customizable plates, pita or wrap sandwiches, and salads, he said. But the menu has been streamlined to speed throughput, reducing the number of ingredients from about 65 to about 40.

“When I came on, one of the first things we fixed was speed of service,” Park said. “If you had 20 people in line, it may take 30 minutes to get served. Now we can get you through that line in 10 minutes.”

The quality of proteins was improved, in particular the steak and gyro, along with the top-selling falafel.

Two company units have been remodeled, and Park estimates that 75 percent of the chain will have the new look by the end of the year.

Efforts are already gaining traction, Park said. So far this calendar year, the chain is seeing some of the best sales in its eight-year history, though he declined to give specifics.

Meanwhile, Park has put growth on hold as the chain goes through the transition.

“It’s important for us to get healthy, and we’re well on our way, before we start branching out,” Park said.

Currently the chain has restaurants in Colorado, Arizona, California, Texas and Georgia. A franchise unit is expected to open in Virginia this year.

Garbanzo also plans to do TV advertising in its home market of Colorado to raise awareness for the changes, he said.

A new website will launch next month, followed by a mobile app that will allow online ordering and pay-ahead features.

A loyalty program was launched earlier this year that Park hopes will be a rich source of data from the brand’s most loyal consumers.

“I believe in the next five years we will go from Mexican to Mediterranean, and from the burrito to the gyro,” he said.

“We know we have a really hot concept here. It’s still very young and there are a lot of lessons learned,” Park added. “We will keep focusing on fixing who we are and getting our product right, our people right, our identity right and telling that great story. And getting our customers to love us again.”