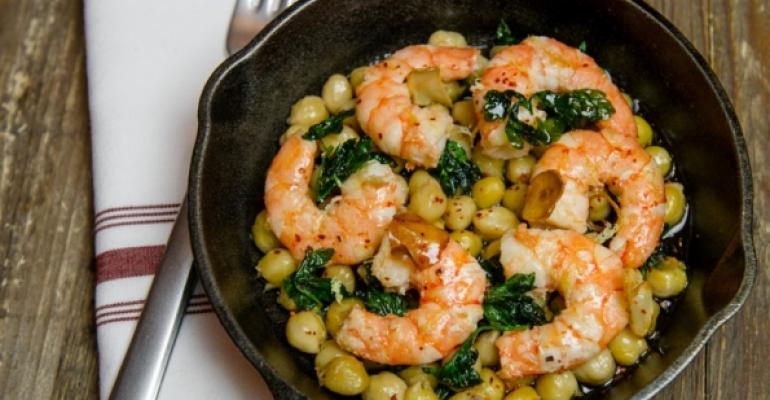 “Selfishly, we wanted to have more options of places that we could go and eat lunch on a regular basis that we felt good about eating,” Duddleston said.

They teamed up with local chef Franklin Becker, a veteran of New York’s fine-dining scene, to develop the menu.

“There’s a huge problem in America today with the way people eat,” Becker said. “We wanted to make a distinct change in the market and make sure people have options that are wholesome and feel good.”

But Aurify is not pedantic in that regard. The company franchises Five Guys Burgers and Fries in Manhattan and Brooklyn, N.Y., and also operates a seven-unit grilled cheese concept called The Melt Shop, in addition to the single unit fast-casual grilled chicken concept Fields Good Chicken.

The Little Beet’s format is similar to other fast-casual restaurants. Customers choose a protein — chicken, tofu, salmon, steak or a seasonal vegetable patty — that they can pair with assorted sides, including quinoa with beets, arugula, mint, dill and sherry-shallot vinaigrette; lentils with avocado, oranges, pecan, kale and lemon dressing; roasted sweet potatoes with Maldon smoked salt, olive oil and pecorino cheese; and charred cauliflower with vadouvan spice and lemon olive oil. They can also add the protein to one of four salads, or wrap it in a “beet roll,” priced at $9.50. The “beet roll,” Little Beet’s answer to sandwiches and burritos, features proteins such as bánh mì or salmon tartare rolled in a large, sushi-like roll containing brown rice, wrapped in nori seaweed and served with wasabi, pickled ginger and chipotle aïoli.

The restaurant also sells cold-pressed juices that are made at the Midtown location and trucked to the Garden City restaurant.

Breakfast options include traditional items such as bacon, egg and cheese sandwiches, made with organic eggs and Niman Ranch bacon in brown rice wraps or on gluten-free rolls, as well as raw organic oatmeal and quinoa oatmeal.

The Little Beet has been busy since it opened, serving up to 300 people per hour during the 12 p.m. to 2 p.m. lunch rush, and an average of around 1,200 people per day. Aurify recently surveyed 1,000 Little Beet guests and found that 75 percent of them eat there once or more a week.

“We have people who eat here three times a day, which is the crazy part,” Becker said.

The restaurant seats 70 people, and about 60 percent of the orders are takeout, Duddleston said.

The Little Beet Table is a full-service restaurant with entrées priced from $20 to $28, except for the $18 burger, with roasted tomato, crunchy potatoes, bacon and local Cheddar on gluten-free bread. Currently on the seasonal menu are line-caught golden tilefish with artichoke barigoule; a grilled skirt steak with roasted fingerling potatoes and chimichurri sauce; and pan-roasted sea scallops with English peas, fava beans and mint.

Appetizers range from $5 for organic roasted and spiced almonds, to $15 for tuna tataki with fennel, oranges, mint and charred jalapeño vinaigrette. Among other options are vegetable crudités with mint raita and roasted red pepper hummus, and tender shrimp with chickpeas, garlic and chile. Side vegetable choices, priced from $12 to $14, include asparagus a la plancha with hazelnut picada and lemon, and roasted carrots with whipped ricotta, sumac and pistachios.

Desserts, priced from $9 to $10, include roasted apples with vanilla-walnut haroseth and local cream, and chocolate mousse with a chocolate chip cookie and Kona caramel.

“The average person orders an appetizer to share,“ Becker said. “Almost everyone gets one or two vegetables, a main and a side. One out of three orders a dessert. Add a cocktail and you’re at $54.”

Becker anticipates that the restaurant will do $3.5 million in sales this year.

Over the next year, Duddleston said the company plans to open 10 Little Beet restaurants and three Little Beet Table locations. The next Little Beet is already slated to open in Midtown Manhattan. The next few locations will open in Manhattan, before expanding to Washington, D.C., and Chicago, he said.

Becker said the company planned to open the next Little Beet Table locations in Washington, D.C., and Chicago, as well as in the Tri-State Area, around New York City.

Becker said he saw the fast-casual and polished-casual segments as providing what customers are looking for.

“I believe there’s a lack of wholesomeness, in general, surrounding the brands that fall below [Little Beet], and I believe there’s a lack of refinement, in general, in the brands that fall between Little Beet and Little Beet Table,” he said. “Customers are more savvy now. They’re smarter. They want more for their buck, and they notice now when ingredients are quality. They’re willing to spend the extra buck, but they want to know when they’re spending it that they’re getting quality.”

Correction: June 10, 2015 A previous version of this story misstated the number of The Melt Shop locations.