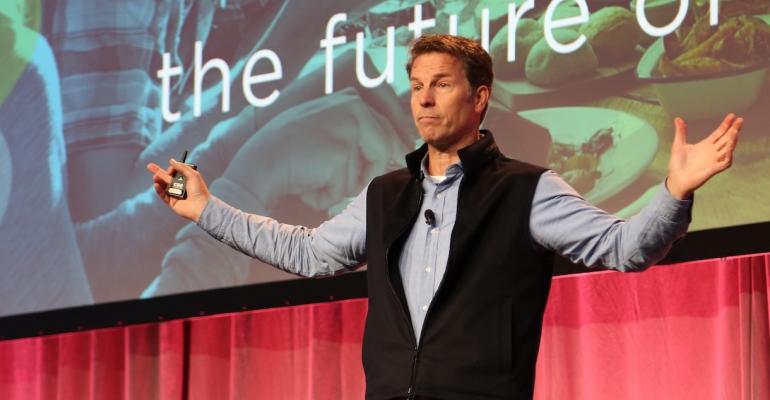 Ron Ruggless
Monty Moran, author of "Love Is Free. Guac Is Extra" and the former co-CEO of Chipotle Mexican Grill, was a keynote speaker at the CREATE conference in Denver.
News>Fast Casual

Moran, who worked with Chipotle for a dozen years, was instrumental in creating the Chipotle culture and authored the 2020 book, “Love is Free. Guac is Extra.: How Vulnerability, Empowerment and Curiosity Built an Unstoppable Team.”

Moran told the CREATE audience he had been in the industry most of his life, starting with an eatery in his family’s home, which carried his nickname “Moose,” serving as a grill cook at a Colorado Dairy Queen, working as a waiter after college and then, separated by a successful legal career, serving as a leader at Chipotle.

“I think that everyone in this audience actually deserves a bit of a congratulations, because just by virtue of sitting here today you've managed to get through one of the most trying periods in the restaurant industry,” Moran told COVID-era conference.

Having talented and empowered teams to get through those challenges has grown even harder, he said, but leadership can be the key.

“Leadership is the active empowering one or more people to achieve a purpose which is both desired by the people and which allows those being led to realize and enjoy their full potential,” Moran said, crediting his book.

Management, with its carrots and sticks and contests and competition, is less effective than leadership, which at core is about giving power away, he said, adding that three words — I need you — are powerful.

“Those are very difficult words to ignore,” Moran said.

Working undercover after he started at Chipotle, Moran said he quickly discovered the company’s six-week “Manager in Training” program was aimed at white candidates who were being trained by mostly Hispanic staff. “There was no real sense of empowerment,” he said. “There was no vision. There was no upward mobility.”

Moran transitioned that to a “Restaurateur Program” and identified lower-level workers to promote. “We created a career ladder,” he said.

Even if restaurant leaders teaches everything they know, Moran said another job will come along that “will be more of a chance to help others.”

“Love is just as powerful and critical at work as it is at home,” he said. “Each of you has great power. By giving away your power, others who could lead by so doing will become the best version of yourself.”