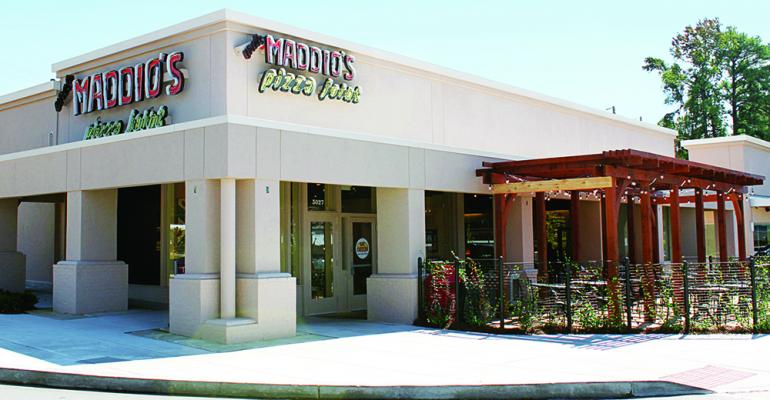 Integrity filed its petition April 13 in U.S. Bankruptcy Court for Northern Georgia, estimating its assets between zero and $50,000 and liabilities of $1 million to $10 million. Its creditors numbers between 50 and 99, according to the petition.

Bankruptcy Court Judge Paul Bonapfel, in a filing Thursday, approved Integrity’s request for a hearing on its use of the cash collateral.

Uncle Maddio’s was founded in 2009 by Matthew Andrew, CEO of Integrity, and has nearly 30 units in nine states, according to the brand’s website. Most of the system is franchised.

Andrew launched Uncle Maddio’s, known for its customizable, made-to-order, New York-style pizzas with a variety of crusts and sizes, as well as salads and toasted panini, after co-founding Moe’s Southwest Grill and then selling his interest in Moe’s in August 2007 to Atlanta-based Focus Brands.

Uncle Maddio’s drew high-profile investments in 2015 from Washington, D.C.-based S&S Group LLC, an early investor in Five Guys Burgers and Fries, and from Atlanta attorney Rutherford Seydel, an investor in Moe’s before it was sold and a minority investor in the Atlanta Hawks basketball team.

Seydel’s law firm, Davis Pickren Seydel & Sneed of Atlanta, was cited as the largest among 20 unsecured creditors in Integrity’s bankruptcy petition with a claim of $177,566. Other claimants included the Georgia Department of Revenue, real estate management companies and vendors.

Some early Uncle Maddio’s franchisees had closed units by November 2016, when founder Andrew blamed those shutterings on the company’s “early mover mistakes.”

At the time, Andrew said the Uncle Maddio’s brand was focused on growing in less urban areas.

“We’ll let Blaze and Pieology go into the urban neighborhoods,” he said. “We work well in the red-state areas, the suburbs and outside big cities, where we’re able to be that neighborhood pizza place.” In January 2017, when the brand had 42 units, Uncle Maddio’s executives said they were launching new marketing initiatives, including redesigned menu boards, an integrated loyalty program and a variety of third-party delivery options.