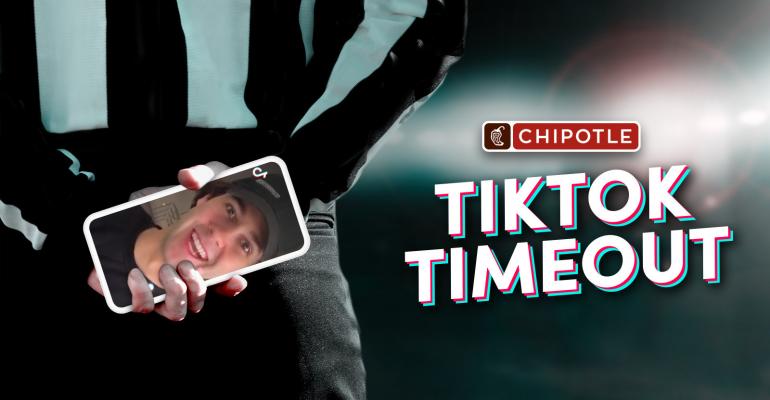 Why pay for an expensive Super Bowl ad when TikTok is free?

That’s the thinking behind Chipotle Mexican Grill’s latest ad campaign, a collection of delivery-focused videos that will be launched on the phenom social media video app during Sunday’s championship game between the Kansas City Chiefs and the San Francisco 49ers.

TikTok Timeout, 15-second video clips featuring social media stars such as David Dobrik, will be shown to viewers of the free app during each Super Bowl commercial break following a team timeout.

“Chipotle will curate a big game ad campaign on TikTok that will compete with traditional advertisements for viewers' attention in real time,” the Newport Beach, Calif.-based fast-casual chain said.

Chipotle, which has never bought a Super Bowl ad before, said creating an ad campaign on TikTok makes more sense for the company as the two brands share the same digital native audience.

“The second screen is essential to the modern-day football viewing experience for Gen-Z," Chris Brandt, chief marketing officer, said in a statement. "TikTok Timeout allows us to show up where our target audience is and optimize the entertainment value of the evening by delivering them fresh content featuring their favorite creators."

Born in the mid to late-1990s, Gen Z is estimated to encompass 2 billion young people who are “digitally empowered” and “expect brands to be ready to interact with them 24/7 on their choices of channels and devices,” according to a study by the National Retail Federation.

They will be sharing the videos on their channels. Fans can view the ads by following them, or  searching #TikTokTimeout on TikTok, whose parent company is the Chinese startup ByteDance Inc.

Chipotle is offering free delivery on all orders of $10 or more made via the Chipotle app or Chipotle.com. The offer is valid every Sunday through Feb. 23.

Free delivery campaigns have been a key driver of digital sales for Chipotle over the last two years. Many have been led by 2020 Power List recipient Tressie Lieberman. During the brand’s latest quarter, digital sales grew nearly 88%. As of December 2019, digital sales at Chipotle reached $1 billion.