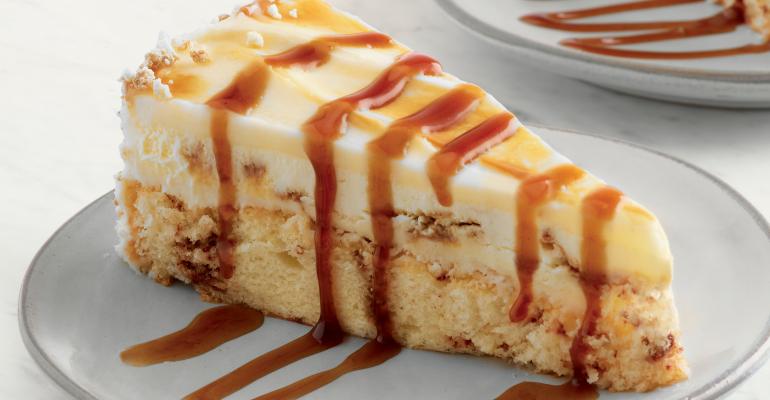 Photo courtesy of Fazoli's
Fazoli's began testing the sale of Cheesecake Factory cheesecakes on its menu in 2019 and the test was so successful, the chain is now preparing to introduce Cheesecake Factory cake onto its menus in the spring.
News>Fast Casual

Fazoli’s partnership with The Cheesecake Factory has added incremental sales without operational complexity.

In 2019, Fazoli’s culinary team approached Teresa Broaddus, senior director of supply chain and quality assurance, and said they wanted to start selling cheesecakes from The Cheesecake Factory Bakery throughout the 215-unit system.

She wasn’t convinced. Fazoli’s already offered cheesecakes, after all, and the classic dessert complemented the Italian menu well. The team eventually compromised on a test and nearly three years later, Broaddus jokingly admits she was wrong.

“I’m OK with it, though, because our sales just exploded during the six-month test. Our sales nearly tripled in the dessert category,” Broaddus said. “We had a cheesecake before the test, but not anymore. There was no need to keep ours because this partnership has been so successful for us.”

The partnership started with the New York-style and triple chocolate cheesecakes available on Fazoli’s permanent menu. Now, the chain offers those two options as well as promotional windows – rotating cheesecake flavors throughout the year, from pumpkin to red velvet to Oreo.

“It’s an add-on for us, for sure. But it’s also exciting for our customers, especially those who don’t live near a Cheesecake Factory. There is a lot of brand (equity) with this partnership,” Broaddus said.

She adds that another major benefit is the operational simplicity that comes from the partnership. Fazoli’s cheesecakes are delivered frozen alongside the chain’s other items.

“All we have to do is plate it up and serve it. Operationally it is very easy for us, and our franchisees love that part,” she said. “Anything we can do to save on labor, especially now, is a win.”

Broaddus adds that the partnership has been a success both for Fazoli’s traditional business and its catering business, as cheesecakes are available by the slice or whole. Whole cheesecake sales tend to increase during the holidays, as well.

“We may look at some other cakes besides chocolate eventually. It’s too early to tell,” Broaddus said. “But this has been a great partnership for us and for our customers and, because of that, I see this partnership evolving.”

Broaddus, who has been with Fazoli’s since its beginning over 30 years ago, said she expects these types of co-branding opportunities to pick up in the restaurant space overall.

“As long as it’s mutually beneficial, I think other restaurants will start to co-brand more, and there are a lot of benefits,” she said. “I definitely think Fazoli’s will continue to do so, since this has been such a great win for us.”