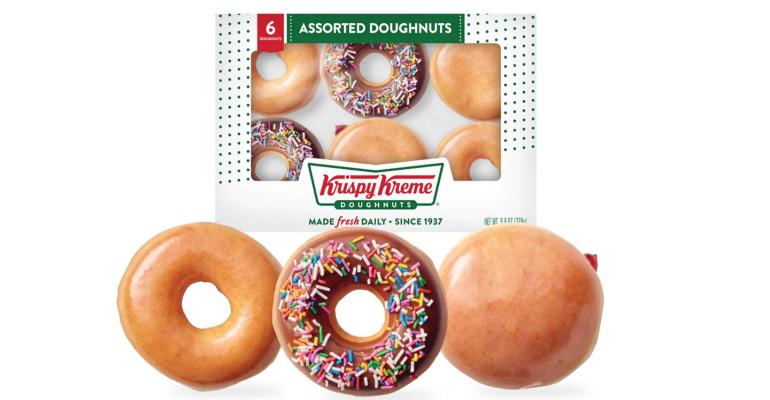 Photo courtesy of McDonald's
McDonald's and Krispy Kreme have announced a small-scale test in which McDonald's will sell three Krispy Kreme donuts at nine restaurants during all dayparts.
News>Quick Service

Nine McDonald's restaurants in the Louisville, Ky., market will start selling three Krispy Kreme donuts to test how the product could impact operations.

Starting Oct. 26, nine McDonald’s locations will begin selling Krispy Kreme’s Original Glazed, chocolate iced with sprinkles and raspberry-filled doughnuts. They will be available all day, on-premises and at the drive-thru, while supplies last. Customers can order them individually or in packs of six. According to a joint release from the companies, the Krispy Kreme doughnuts will be delivered fresh daily to participating restaurants.

The timing of this test is interesting, as McDonald’s recently brought back its glazed pull apart donut for breakfast, lunch and dinner. Given that the initial test is small, however, any predictions about impact on this item or other McDonald’s McBakery items are premature.

“McDonald’s is always looking for ways to give our fans more of what they crave, and we often conduct tests to inform future menu decisions. This small-scale test will help us understand how offering new bakery items like Krispy Kreme could impact operations in our restaurants,” the companies said in the release.

Otherwise, there is a lot like about this partnership. For starters, it adds a popular new category to McDonald’s menu (the doughnut market is expected to grow by 4% through 2025) without adding operational complexities. The doughnuts will still be made by the doughnut experts and delivered as-is to restaurants.

Second, having that new category is a way to drive even more traffic to McDonald’s, which has already been experiencing positive traffic versus 2021 and much of 2019, according to Placer.ai data emailed to Nation’s Restaurant News.

Third, given that doughnuts tend to be most associated with breakfast, the addition of Krispy Kreme products could further bolster McDonald’s morning market share as competitors like Wendy’s and Chick-fil-A increasingly prioritize this daypart. Breakfast represents about 25% of McDonald’s U.S. sales, outperforming the rest of industry, which generates about 20% of sales through breakfast. The daypart is also responsible for a higher percentage of the McDonald’s profitability.

For Krispy Kreme, the partnership provides the potential to create a huge network of access points per the company’s objective. Increasing access led to sales-per-hub growth of more than 20% for the company during Q2. Krispy Kreme executives want to create a network of more than 10,000 access points in the U.S. and the company has traditionally done so through retail. In fact, Krispy Kreme started out as a wholesale factory that only sold to grocery stores, so this extension with another quick-service brand could set the stage for more.

The release mentioned nothing about exclusivity, nor did it detail how sales would be divided or how a potentially expanded rollout would impact franchisees or supply. Outside of major retail outlets like Kroger, Walmart and Target, there are no online mentions of Krispy Kreme sales within another restaurant brand.

However, this collaboration illustrates a bigger trend that has emerged throughout the past few years with the advent of virtual concepts generating business through already-existing kitchens, as well as more co-branding opportunities that leverage brand equities and efficiencies. Take, for instance, Red Robin and Donatos pizza. Red Robin began adding Donatos pizza in 2018 and has since ramped up its partnership to hundreds of locations. Red Robin’s restaurants with Donatos pizza have outperformed other restaurants by 300 basis points and have helped increase the chain’s off-premises business to over 40% of its sales. Red Robin executives expect its pizza profitability to exceed $25 million by next year.

To put a finer point on it, such a strategy increases efficiencies in a time when higher costs mandate as much. It’s no wonder, then, that Krispy Kreme’s stock surged after news of the McDonald’s test broke Tuesday.