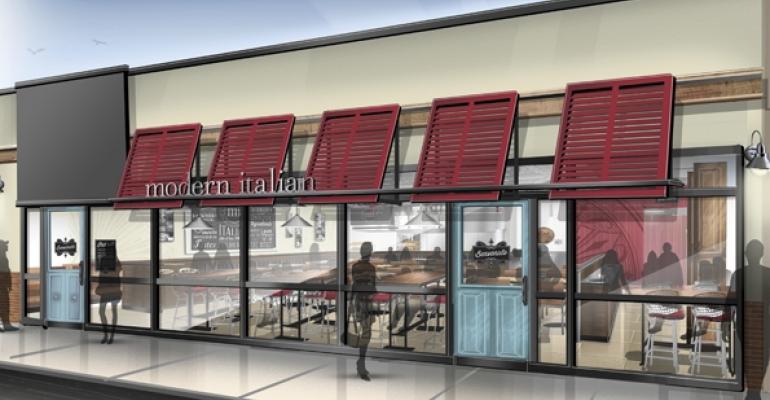 Venti-Tre enters a tightening race to define and build out an Italian sub-segment of fast casual.

“We want to grow it as quick as possible, but be diligent,” Howard said. “We don’t want to make a mistake with real estate. At this point in time, there is so much real estate for this concept, if you think of all the cities not yet exposed to this [fast-casual Italian segment]. It has a lot of legs to grow.”

The concept will debut in The Shops at Canton Cross in Baltimore. Fazoli’s is close to a deal for a second unit to open just outside Washington, D.C., next spring, Howard said.

Venti-Tre, Italian for “twenty-three,” refers to 23 fresh toppings on the concept’s menu, built upon a piada, pasta or salad. Customers will create their own entrees by selecting one of those three platforms, then selecting from several grilled meats or vegetables, then from several sauces or dressings, as well as different kinds of cheese. Toppings include tomato-basil bruschetta, fried capers and focaccia croutons.

Desserts will include miniature tiramisu parfaits and cinnamon-sugar bomboloni, or Italian doughnuts. Venti-Tre also will have an Italian soda bar in addition to soft drinks, beer and wine.

Prices are expected to land in a fast-casual-friendly range between $9 and $11.

Fazoli’s is targeting Baltimore, Philadelphia and Washington, D.C., as the first three cities and outlying markets to expand Venti-Tre. Howard said that region could support as many as 50 locations over the near term.

The company would look to leverage its infrastructure and support systems to begin franchising Venti-Tre very soon, Howard said. He added that Fazoli’s franchisees have shown interest in Venti-Tre and that the new concept would be a complementary growth vehicle in mature markets where those operators have built Fazoli’s to saturation.

He also sees room for Venti-Tre to expand without competing too much with Fazoli’s, which the company has improved over the past several years with upscale, fast-casual-like touches such as an overhauled menu, remodeled locations, and service upgrades like real plateware and food runners.

The company might feel some more pressure to grow Venti-Tre faster if fast-casual Italian competitors like Piada Italian Street Food jump from their core markets to the East Coast corridor that Venti-Tre is staking out, “but I’m not too concerned about that yet,” Howard said.

Last year, Piada opened a restaurant in its headquarters city of Columbus, Ohio, 100 yards away from a freestanding Fazoli’s, Howard said, “and our sales never moved.”

“It’s a completely different clientele,” he said. “The Fazoli’s consumer is a more value-conscious consumer, and the fast-casual consumer is less so.”

Fazoli’s restaurants operate in 23 states. The brand is one of several restaurants owned by Boca Raton, Fla.-based Sun Capital Partners.