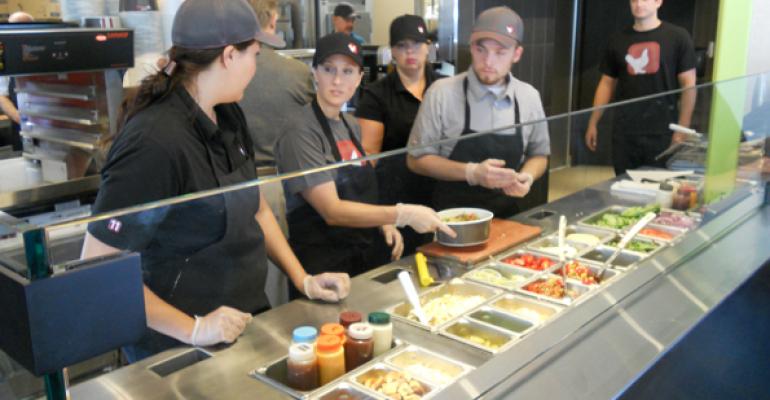 Quick-service chain KFC is looking to tap into the fast-casual market with its KFC eleven concept.
News>Fast Casual

Fast-casual restaurants continue to lead the restaurant industry in growing traffic and unit count, especially in markets like Colorado and Florida where brands are quickly grabbing hold of market share, according to new research from The NPD Group.

The Port Washington, N.Y.-based market research firm found in its CREST industry tracking service that for the 12 months ended in May, visits to fast-casual restaurants grew 9 percent compared with a year earlier, while total industry traffic was flat during the same period.

Its recently released “Spring 2013 Recount” report also found that fast-casual chains collectively increased their unit count by 7 percent over the 12-month period ended in March. The report noted that full-service restaurants’ number of locations remained relatively flat during that time.

“Many of the fast-casual chains have been adding units in an otherwise soft restaurant environment,” Greg Starzynski, NPD Foodservice director of product management, said in a statement. “Traditional quick-service restaurants have taken notice and are working to compete with the fast-casual chains’ offerings, especially in terms of the freshness and quality of food. All of these efforts will benefit both the consumer and the industry.”

In Kentucky, the Lexington-Fayette metro area had the fifth-highest fast-casual density in the nation, with 11.72 units per 100,000 people, while the Bloomington-Normal metro area of Illinois ranked No. 8, with a density of 11.12 fast-casual restaurants per 100,000 citizens.

Two other large cities made NPD’s list of 10 markets with the most fast-casual restaurants per person. In Nevada, the Las Vegas-Paradise metro area boasted 225 restaurants for more than 2.02 million people, giving it a density of 11.13 units per 100,000 residents.

The metro area encompassing the District of Columbia, Arlington and Alexandria, Va., and parts of Maryland and West Virginia had a population of nearly 5.8 million people and 593 fast-casual locations, yielding a density of 10.23 units per 100,000 residents.