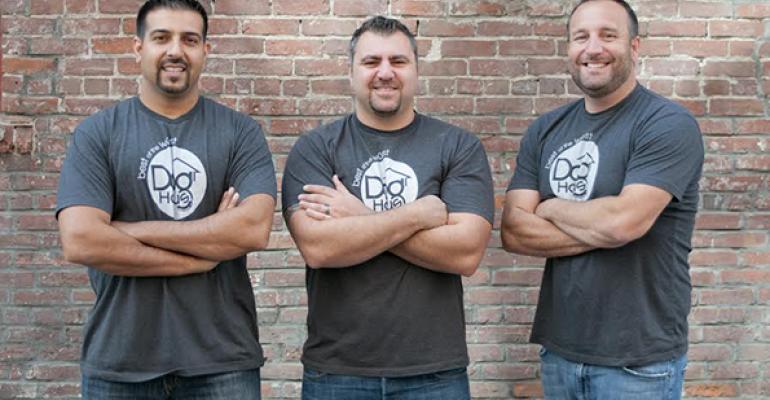 When friends, restaurateurs and hot dog enthusiasts Hagop Giragossian, Quasim Riaz and André Vener were looking for a new venture during the economic downturn in 2010, an updated spin on the classic, affordable hot dog stand seemed like a perfect idea.

But instead of traditional franks topped with mustard, the Pasadena, Calif.-based partners opened Dog Haus, a gourmet hot dog concept featuring homemade sausages, burgers and dogs topped with everything from kimchi to tater tots. With and average check of $12.75, the concept wasn’t a typical street corner hot dog cart, but the unique flavors struck a chord with both customers and eager franchisees.

Founding partner Giragossian recently spoke with Nation’s Restaurant News about the brand’s recent growth surge, his thoughts on franchising and elevating the perception of the hot dog.

You’ve sold over 70 franchises. How did that come about?

From the moment we opened, customers were always asking if we were a franchise. We had initially thought that franchising was not the path we were going to go down. We wanted to just continue opening up our own restaurants, and had a different opinion of what we thought franchising was until we learned more about it. After being open for about a year and a half, we thought we’d explore the idea. It literally took one day to figure out that we had the wrong idea of what franchising is. In the first quarter of 2015, we will be opening in Colorado, Utah and Arizona.

How did your view of franchising change?

The market has changed, and fast casual has really become stronger, and the Chipotles of the world have changed everybody’s opinion of what faster food is supposed to be. The economy goes down and all of a sudden we have great chefs making more casual food. The environment completely changed, and you can really franchise anything and do it in any way you want without losing your identity or your quality, as long as you are willing to make the rules and enforce them so that your franchisees want to follow.

What do you look for in a franchisee?

First off, we look for customers. Everybody that has bought so far has been a customer and a fan. We didn’t advertise the sale of a franchise. We just put a notice inside our stores at the register. We realized that people just wanted to be part of the brand.

We talk about 1,000 units as a really interesting goal. We believe the concept literally fits in every market and every community. One thing that we were extremely surprised about was that the second we turned it into a franchise we got a lot of requests from places oversees like the Middle East, China, Europe and South America.

You guys do hot dogs, sausages and burgers. What was the vision of the brand?

We want to change people’s perception of what a hot dog is and what they think goes into making a hot dog. Above a good idea and a cool idea is quality and taste. For our sausages, you can put everything you are as a chef and put it into a casing. We have some traditional stuff, but we want people to know that a sausage and a hot dog can be anything. We also always want it to be a community-based gathering place instead of something cold and distant.

Do you have any signature items that are particularly popular with your customers?

One is called Another Night in Bangkok, which is a spicy red curry sausage, Asian slaw, peanut sauce and crushed peanuts. In November we are going to roll out the Plymouth Rock Wurst, which features a turducken sausage made of turkey, duck, chicken, sage, rosemary, whiskey-soaked cranberries and sweet potatoes.