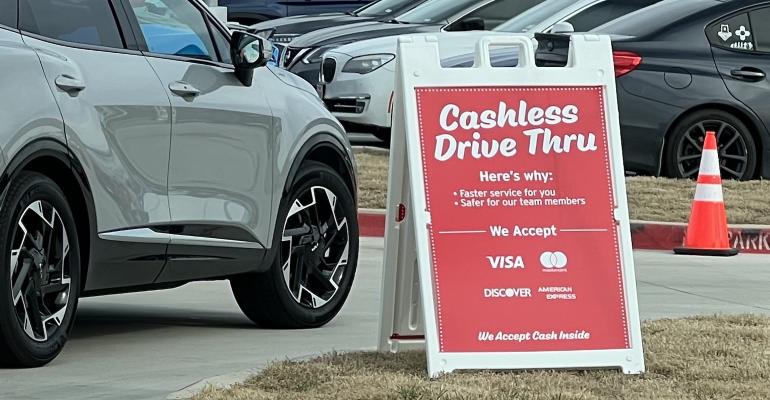 As price pressure on proteins begins to ease, inflation for side items like French fries and onion rings are knitting restaurant executive brows.

“The most pressure that we are going to see are going to be on French fries and onion rings, which is a big side item for Portillo's,” said Michelle Hook, chief financial officer for the Oak Brook, Ill.-based Portillo’s Inc., during a presentation earlier in January at the ICR Conference in Orlando, Fla.

The company also announced that as of Jan. 16 it is going cashless in all of its drive-thrus, though cash will continue to be accepted inside the restaurants.

Portillo’s began accepting only cashless payments in its drive-thru lanes in response to robberies, according to Michael Osanloo, Portillo’s CEO and president.

The drive-thru at just-opened unit in The Colony, Texas, the brand’s first in the Lone Star State, was cashless when it opened. The company said in a statement: "This creates a faster, smoother service for our guests and is safer for our team members. We will only accept cash inside our restaurants. We’d be happy to accept credit or debit cards outside or serve cash guests inside.”

That pales in comparison with beef, chicken and pork at about 50% of commodities, she said. While beef is about 35% of the basket, Hook warned that price pressure may return on that item in the back half of the year.

Data from the National Onion Association indicated that the 2022-2023 U.S. production levels are about 5% lower than the prior year.

Osanloo told the ICR gathering that Portillo’s has reduced the number of items prepped in house, producing efficiencies. Some of those items include red onions and Italian sausage.

He also said the company is working on new kitchen designs. “We've taken 18 linear feet out of our kitchen,” Osanloo noted.

Portillo’s, founded as a hot dog stand in 1963, has more than 70 restaurants.

Update Jan. 20, 2023: This story has been edited to include comment from the company on the cashless drive-thru.