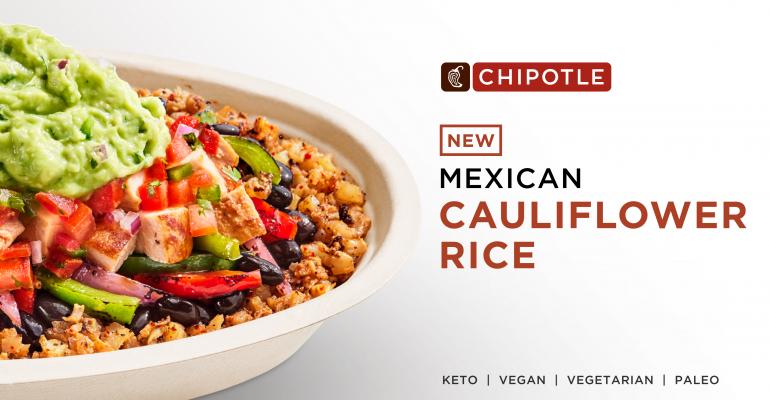 After the success of last year’s Cilantro-Lime version, the latest test is spiced with cumin and paprika

Chipotle Mexican Grill’s last introduction of cauliflower rice went so well, the fast-casual chain is testing another version of the recipe.

Chipotle announced on Thursday that it is testing Mexican Cauliflower Rice at 60 participating units in Arizona, Southern California and Wisconsin for a limited time. Through June 21, there’s a $0 delivery fee on orders of $10 or more that include the new dish, where it’s available.

Related: Will this steak dish make it to Chipotle Mexican Grill’s menu?

Last year, of course, Chipotle had a hit with the introduction of Cilantro-Lime Cauliflower Rice to restaurants in U.S. and Canada, both as an incremental sales lift and attracting new guests. The chain estimates that one in five Cilantro-Lime rice orders in January 2021 were from guests trying Chipotle for the first time.

“After the success of our Cilantro-Lime Cauliflower Rice last year, we are eager to test a second plant-powered start for any go-to order,” said Nevielle Panthaky, Chipotle’s vice president of culinary, in a statement. “Our guests crave real, plant-based options so we developed a new flavor packed recipe that aligns with our Food with Integrity standards.”

How is the new rice different from last year’s version?

It’s made in the style of Mexican rice, but with cauliflower, grilled on the plancha with garlic, cumin, salt and paprika, which gives it a “vibrant hue” and rich flavor, according to press materials.

Like the first cauliflower rice version, the Mexican Cauliflower Rice has a higher price: there’s an upcharge of $2.25 for the selection, though prices vary by region.