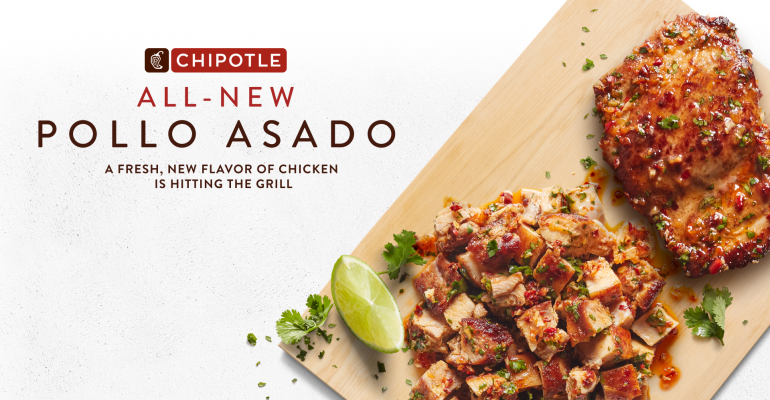 Chipotle Mexican Grill
An entree with the new Pollo Asado is priced at an average of $9.11.
News>Fast Casual

Chipotle Mexican Grill on Thursday rolled out its long-awaited Pollo Asado in the U.S. and Canada, the first new chicken menu item at the chain in 29 years.

The new item was tested in Sacramento and Cincinnati last year, and results were on par with the popular Smoked Brisket limited-time offer available at the end of 2021. Pollo Asado is also a limited-time offer, and will join the menu alongside the chain’s top-selling Adobo Chicken, which is a permanent menu item.

Chris Brandt, Chipotle’s chief marketing officer, said chicken is easily the most popular protein across the 3,000-unit chain. “We’re thrilled to introduce fans to another flavor of chicken that brings a whole new dimension to any Chipotle order and will certainly be a crowd pleaser,” he said in a statement.

An entrée with Pollo Asado has an average price of $9.11 in the U.S., company officials said. On average, it costs about 65 cents more than Chicken Adobo.

Sharon Zackfia, group head of consumer research at William Blair, in a report Thursday said the new Pollo Asado is priced about 10% higher than Chipotle’s Chicken Adobo, based on average prices tracked across major cities across the country. But Pollo Asado is about 5% less than the steak or barbacoa options, she said.

Chipotle describes its new Pollo Asado as Responsibly Raised chicken tumbled in a spice blend, seared on the plancha and hand chopped before being topped with a squeeze of lime and cilantro.

Orders through the app and online from March 14-20 will receive a $0 delivery fee.