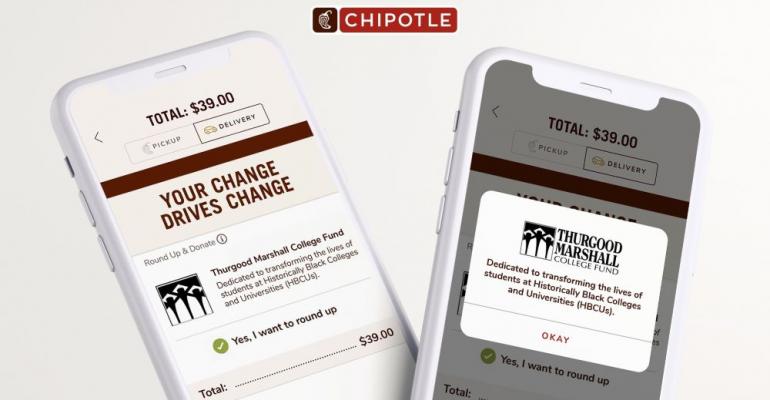 When it comes to diversity and inclusion at Chipotle Mexican Grill, the company is putting its words into action through various programs announced this week.

“Cultivating a better world takes commitment from all of us and I’m encouraged by the accomplishments to date and eager to see how much more we can achieve together. It is imperative that we keep the conversation going,” Marissa Andrada, chief diversity, inclusion and people officer, said in a statement.

Related: How restaurants can embrace diversity and inclusion in the wake of the Black Lives Matter resurgence

In the days following the death of George Floyd, which sparked demonstrations across the United States, Chipotle pledged $1 million in early June to support organizations advocating against systemic racism. That campaign started with a $500,000 company donation to the National Urban League.

The company also launched in early June a “round-up” program via its digital channels to raise funds for various organizations, starting with the National Urban League. That led to more than 1.4 million guests raising about $1 million with an average round up of 45 cents per order.

On Thursday, Chipotle launched a second round-up fundraiser to benefit the Thurgood Marshall College Fund. Starting Aug. 6 and running through Aug. 23, Chipotle customers can round up their change to the next highest dollar amount on the Chipotle app or website.

The funds will “help drive real, meaningful change for the Black community,” the company said. Chipotle also plans to partner with the college fund’s Talent Sourcing Program “to identify and develop diverse talent.”

“At Chipotle, our mission has always been to cultivate a better world. This isn’t just through real food, but through real, meaningful action,” CEO Brian Niccol said in a June letter. “We need to do better and we encourage our community and fans to join us in our fight for equality.”

Beyond the round-up program, the company outlined this week various other initiatives to create an equal society.

On the marketing side, the chain said it is taking the following steps: ensuring advertising campaigns mirror the demographics of its employee population and is inclusive of the race and ethnicity of Chipotle employees; working with a diverse mix of social-media influencers; partnering and contributing to Black organizations; pausing all paid advertising on Facebook and Instagram until the company can better understand the changes the social-media giant is making in regard to “harmful content” posted to their platform; and matching the prize pool for the Chipotle Challenger Series II esports competition by donating $25,000 to the National Urban League.

The company said it will also appoint diverse representatives to its Board, pilot a mentorship program to identify a diverse group of talent for development and greater advancement within the company, and introduce a new multicultural employee resource group.

Other internal intiatives include expanding Andrada’s role from chief people officer to chief diversity, inclusion and people officer.  She recently launched “The Real Scoop with Marissa,” a virtual multicultural education series featuring conversations with Black influencers across a variety of industries.