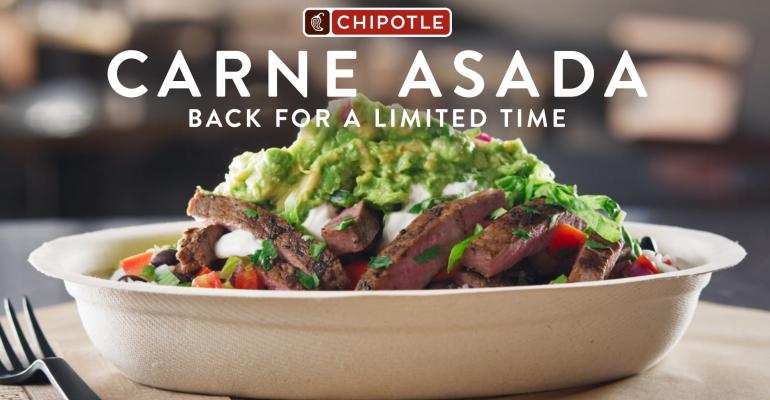 The LTO protein, which was tried by 10 million fans before coming off the menu in early 2020, will be available to loyalty members first; in-store availability begins Sept. 28.

Chipotle Mexican Grill is bringing back carne asada, the fastest-selling new protein in the brand’s history. But the debut comes with a tiny twist.

The Newport Beach, Calif.-based fast-casual chain is giving its more than 16 million loyalty members first crack at ordering the popular protein, which landed on the menu for the first time nationwide last September.

Reward members in the U.S. will get exclusive access to carne asada for two days starting today, Sept. 22 via the brand’s digital channels. After that, from Sept. 24-27, the protein will be available for digital orders only – a new strategy the chain is pursuing with some new menu items.

Carne asada will then be available through all other channels, including carryout/dine-in orders and third-party delivery, starting Sept. 28.

Carne asada, which came off the menu in early 2020, was tried by more than 10 million customers – about half of which were estimated to be first-time customers, Chipotle said.

The LTO, which surpassed chorizo as the most popular limited-time protein offering during its debut run, contributed to higher check averages and a boost in new customer traffic during the brand's fiscal 2019 third-quarter.

But high demand led to supply challenges when the protein debuted last year.

This week, officials said sourcing won’t be a problem this time around.

"To bring back carne asada to our menu, we underwent an extensive vetting process to find more suppliers that meet our stringent Food with Integrity standards," Chris Brandt, chief marketing officer, said in a statement. "Our fans love our carne asada because they can taste the care and culinary expertise that goes into this recipe from farm to bowl."

The carne asada is made mostly from the top sirloin, unlike Chipotle’s current steak which is mostly from lower on the hind quarters of cattle, or the barbacoa which comes from the chuck.

The meat is seasoned with spices including cumin and coriander and finished with lime and chopped cilantro. Like other proteins at Chipotle, it’s cooked in sous-vide at a commissary. It’s then finished on griddles in each restaurant.

The premium steak is suitable with Keto and Paleo diets and has been officially approved for the Whole30 diet, Chipotle said. It will also return to menus in Canada, and be available for the first time in France.

Chipotle said the average price for a standard entree with carne asada is $8.50.

Last week, Chipotle CEO Brian Niccol hinted that carne asada would be making a comeback for a limited time during an investor conference. He said the chain is about two years away from making carne asada a permanent menu offering, a delay tied to finding the right suppliers.

“We now have an audience and scale where I think we can support doing digital-only initiatives like the quesadilla,” Niccol said last week.