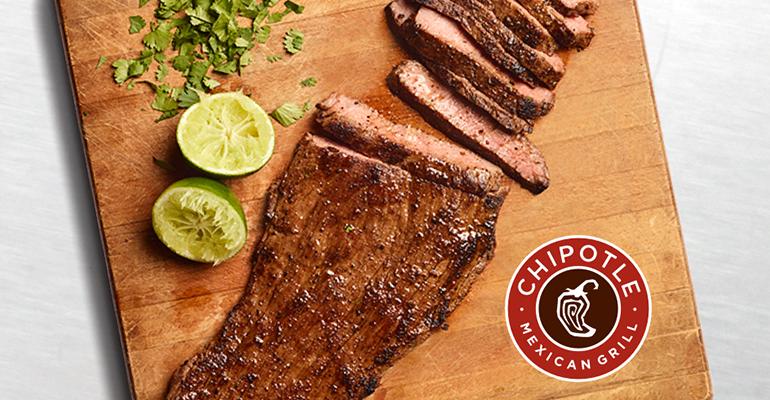 Chipotle Mexican Grill is rolling out carne asada, a type of steak, systemwide for an unspecified limited time starting on Sept. 19, chain executives said Tuesday. It’s the first protein Chipotle has introduced since it offered chorizo as a limited-time offer in September of 2018.

The carne asada is made mostly from the top sirloin, unlike Chipotle’s current steak which is mostly from lower on the hind quarters of cattle, or the barbacoa which comes from the chuck, according to Nevielle Panthaky, Chipotle’s vice president for culinary and menu development. It’s seasoned with spices including cumin and coriander and finished with lime and chopped cilantro. Like other proteins at Chipotle, it’s cooked in sous-vide at a commissary. It’s then finished on griddles in each restaurant. Its average price is $8.50 in a standard entrée, about 50 cents more than the other beef options — steak and barbacoa— and $1 more than the chicken, pork carnitas and tofu Sofritas. The new item is suitable for the Paleo diet and also has been officially approved for the Whole30 diet, Newport Beach, Calif.-based Chipotle said.

Panthaky, incidentally, is a former corporate chef for IHOP, where he was involved in the development of the burgers that were rolled out to much fanfare in 2018. He joined Chipotle a year ago, he said. 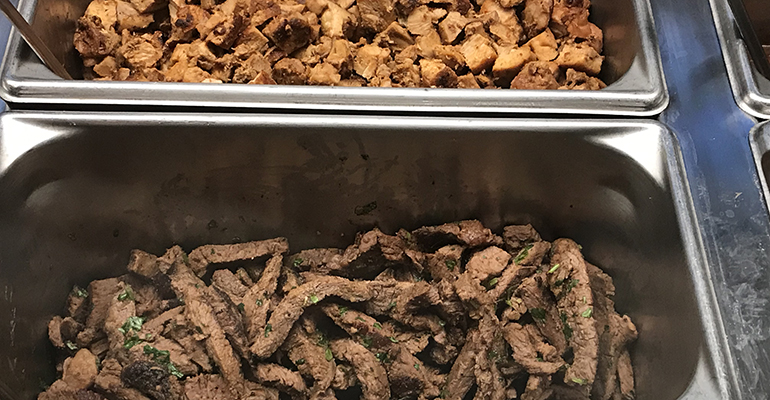 The carne asada went through Chipotle’s new stage gate process — a system of testing in product development, common at other chains, in which an item is vetted through a series of steps, from ideation through sampling and then operational and market tests before being rolled out. The carne asada was tested in Fresno, Calif., and in Cincinnati.

Chipotle is continuing the test of its queso blanco, a newly formulated cheese sauce made with aged Monterey Jack cheese, white cheddar and three types of peppers: serrano, poblano and chipotle. Panthaky said the new queso, currently being tested in Detroit, Dallas and San Diego, has more milk and cream and younger cheeses than the current queso. Chipotle’s original cheese sauce, introduced in 2017, is made with cheddar, tomatillos, tomatoes and several pepper varieties and has been criticized for not being smooth enough.

Panthaky said the new steak was in line with Chipotle’s “food with integrity” ethos.

To promote the rollout, Chipotle hired film director David Gelb — who created Jiro Dreams of Sushi, Chef’s Table and Street Food — to produce documentary-style promotions showcasing how the carne asada is made.