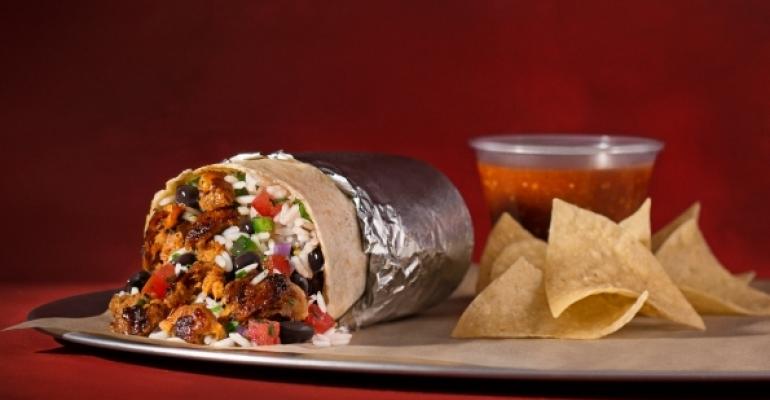 Addition is part of overall plan to bring customers back

Chipotle Mexican Grill Inc. is considering adding chorizo to its menu to bring back both loyal and lapsed customers, the company said Tuesday.

In a call with Wall Street analysts after reporting its first quarterly loss as a public company, Chipotle executives said the chain had been testing chorizo, a spicy chicken and pork sausage, at units in Kansas City, Mo., last year, and was considering an expansion to more markets. But then the chain’s foodborne illness crisis hit and lingered over several months, and the menu expansion was tabled.

Now, Chipotle is coming back to chorizo, which will give customers something new to get excited about, said Mark Crumpacker, Chipotle chief creative and development officer.

In the test last year, chorizo was “very, very popular with our loyal customers,” Crumpacker said. “In fact, for a lot of people who tried it, it quickly became their most favorite protein.”

It’s too soon to know whether chorizo will be a permanent item, but Steve Ells, Chipotle chairman and co-CEO, said it will fit easily into cooking processes and pairs well with existing ingredients.

“It has lots of little crispy bits, so it has nice spice and really good texture,” Ells said. “It was very popular, and I’m excited to see how this works.”

The chain is also beefing up its delivery features. The integration of third-party delivery provider Postmates with Chipotle’s back-of-the-house ordering system is complete, allowing delivery orders to go directly to the restaurant’s make line.

The system is in place in San Francisco and Atlanta, and the company plans to roll it out systemwide this summer. The same integration is planned with the chain’s other delivery partners, Crumpacker said.

Chipotle is also testing a system designed to reduce the time between mobile and online orders and pick up. That effort is also scheduled for rollout nationally this year.

“The system dynamically monitors the flow of orders into our restaurants and gives our customers the shortest possible order completion time, while simultaneously ensuring that the restaurants will complete orders on time,” Crumpacker said.

In addition, the chain’s mobile app has also been updated to speed the payment process and streamline reordering for frequent customers, he added.

Ells said Chipotle sales began to recover in the second half of the first quarter from the lows reported in January, improving by 18 percentage points in February as the company invested in freebies and promotions to bring customers back.

Customers redeemed more than 6 million free burritos or bowls during February and March. The chain also gave away nearly 1 million free orders of chips and salsa or guacamole.

The chain is running a national advertising campaign through the end of June, and research indicates the effort is performing particularly well with new customers, Crumpacker said.

In coming months, the chain plans to focus on nontraditional marketing, including a short film and promotional game, which Crumpacker said would have “traffic-driving components.”

“Of course, we would like to see our sales recover more quickly, but we remain confident in our long-term strategy to welcome customers back into our restaurants,” Ells said.

In early March, however, Chipotle temporarily closed a Boston-area restaurant after four workers stayed home sick, as is now required under Chipotle’s new protocols. Some news reports incorrectly referred to the incident as another outbreak, and same-store sales plunged again to negative 27 percent for a few weeks in March, before recovering to down 20 percent by the end of the month.

For the month overall, same-store sales fell 26.4 percent, with Easter offering a negative impact of 2.5 percent because restaurants were closed.

Analysts, however, saw the April decline as worse than expected, saying the recovery will likely be delayed even further and will require the use of more freebies.

“Management cited its desire to move to a less aggressive promotion (e.g. buy one, get one free), but given that sales trends remain disappointing, we now believe that management will consider extending its more aggressive free burrito offer into the second half of 2016,” wrote Stephen Anderson of Maxim Group in a report Wednesday.

Mark Kalinowski of Nomura said in a report Wednesday that what Chipotle needs most to heal itself is time.

“And time cannot be rushed,” Kalinowski wrote, quoting Ells, who said, “The best approach to rebuilding our business is to proudly serve safe and delicious food in our high-quality restaurants every single day, which is exactly what we will continue to do.”