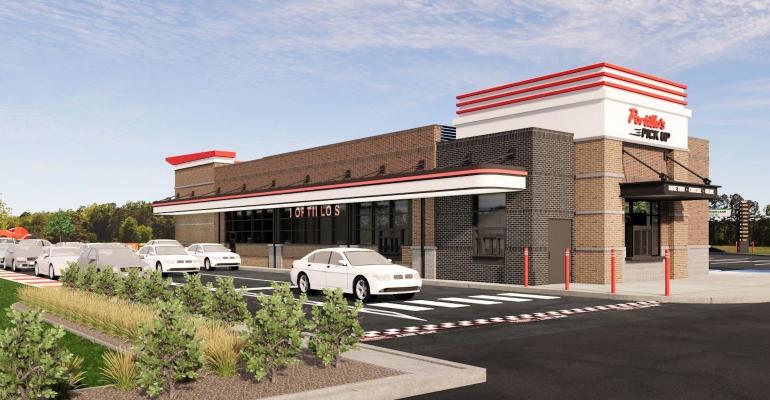 Portillo's Inc.
Portillo's expansion plans include a triple drive-thru-only restaurant in Joliet, Ill., which is scheduled for opening in February.
News>Fast Casual

Portillo’s Inc., which started trading as a public company In October, posted same-store sales increases of 6.8% in the third quarter ended Sept. 26, largely attributed to an increase in check average, the company said Thursday.

The Oak Brook, Ill.-based fast-casual brand said its average check increased 7.9% in the quarter, “partially offset by a decline in traffic.”

“The higher average check was driven by an increase in menu prices, mix of items sold and more items per order,” the company said in a press release.

Michael Osanloo, Portillo’s CEO and president, said in a statement that “as we look ahead, our successful IPO has given us the financial flexibility and improved capital structure to capitalize on the massive white space opportunity to grow Portillo’s throughout the country.”

The company has 16 restaurants in the pipeline for 2022 and 2023, Osanloo said in an October interview after the IPO.

“We've identified seven restaurants for ’22,” he said. “We’re going open two in Arizona, two in Florida. We have one coming in Texas, which I'm really excited about, and then another restaurant in Michigan and Illinois. And then ‘23 we're targeting nine restaurants.” A likely new market in 2023 will be Ohio, Osanloo added.

The company plans its first pick-up-only restaurant, a no-dining-room triple drive-thru unit called Portillo’s Pick Up, in Joliet, Ill., which is reportedly scheduled for opening in February. The third lane at the 3,750-square-foot restaurant will be dedicated to online-only customers. A triple drive-thru unit with dining room is expected in Madison, Wis., this month.

In Thursday’s statement, Osanloo added that Portillo’s expansion is “a two-pronged strategy” aimed to growing in existing core markets in the Midwest and “targeting major national markets for opportunistic growth.”

The company said it planned to emphasize its multi-channel sales for its menu of Chicago-style hot dogs, Italian beef sandwiches, burgers, salads and cake — drive-in, drive-thru, delivery, catering through Portillo’s Home Kitchen and direct shipping to all states.

Portillo’s has 68 locations across nine states.