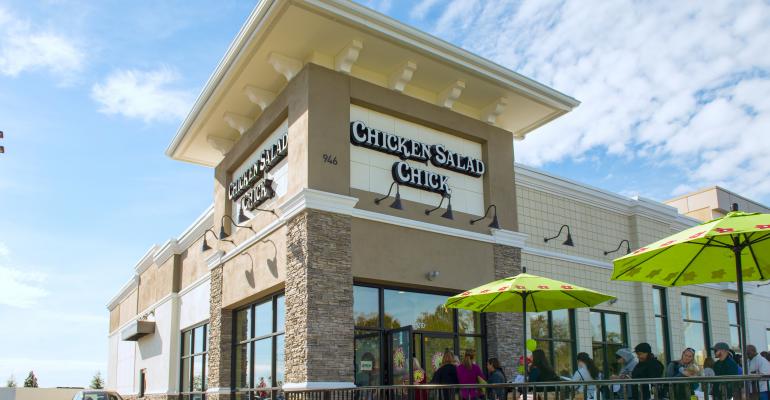 “We are very excited to partner with Brentwood on the next chapter for Chicken Salad Chick,” said Scott Deviney, CEO of SSRG Holdings, in a statement. “Brentwood’s long track record of working with leading restaurant companies coupled with their understanding of our business objectives and strategy make them the perfect partner for us to continue executing on our robust growth and expansion plan.”

Deviney will continue as CEO, the companies said.

Fast-casual Chicken Salad Chick has 137 locations in 16 states, mostly in the Southeast. The brand was founded in 2008 by Stacy and Kevin Brown when they opened the first restaurant in Auburn, Ala. Eagle Merchant Partners made an investment in the company in 2015.

The brand features a dozen chicken salad preparations served by the scoop, sandwich or bowl. The menu also has versions of pimento cheese and egg salad.

Rahul Aggarwal, partner at Brentwood, said: “Chicken Salad Chick’s model fits well within our strategy of investing in high-growth, best-in-class consumer businesses. We look forward to working with Scott and the Chicken Salad Chick team to build upon their success in the markets they serve."

Stockton Croft, partner at Eagle Merchant Partners, added, “We are extremely proud of Chicken Salad Chick’s achievements during our ownership, which resulted in a seven-fold increase in system sales and over 100 new restaurants.”

Chicken Salad Chick was also named an NRN Breakout Brand in 2015, when it had 29 units in six states.