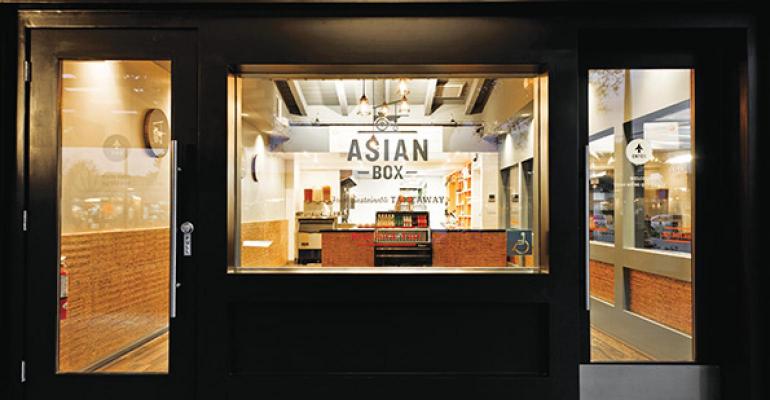 The fast-casual Asian Box chain has named Mike Speck to the role of CEO, the company said Monday.

Speck is the former chief operating officer of New York-based The Halal Guys, which launched a franchising program in 2014 and grew from four to close to 100 units in nearly three years.

At Asian Box, he replaces Frank Klein as CEO. A co-founder with partners Chad Newton and Grace Nguyen, Klein will remain with Asian Box as brand ambassador.

Klein later this year is also launching a new chicken concept in Palo Alto, Calif., to be named Roost House, he said.

Speck will help position the 10-unit Asian Box for growth, said Klein. The chain is looking at the options of licensing, franchising or taking on a larger partner to accelerate growth plans, he said.

“I’ve known Mike since before we opened the first Asian Box, and we personally picked him because we know he is imminently qualified to lead Asian Box in the next phase of its growth and is just as passionate about the brand as the founding partners,” Klein said in a statement.

In an interview, Klein said Roost House will have a menu focused on fried and roasted chicken, with chef-driven side dishes and a “ton of plant-based alternatives.”

“More than half of the menu will focus on chicken, but about 25 percent will be around plant-based proteins and salads and alternatives to meat,” he said. “It will be very heavy on vegetables.”

To support that emphasis, Roost House is working with a freight farming company to create a program in which much of the restaurant’s produce will be grown locally in former freight containers. Klein is developing an entrepreneurial training program for at-risk and underprivileged youth to learn how to run the freight-produce business as a start up. The goal is to produce 18 or so “graduates” of the program every 90 days, who will learn all aspects of operation, he said.

“It’s something near and dear to my heart,” said Klein. “I always believed in the ‘teach a man to fish’ theory.”

The restaurant will be both full-service and fast-casual, allowing guests to decide which experience they prefer. The 40-seat concept will have a separate area for counter ordering, and to-go business, and an area for full-service dining and “heightened hospitality.”

“We want to give the dining room back to the customer,” said Klein. “It will be a unique dining experience at a price point that’s accessible; a great community restaurant.”