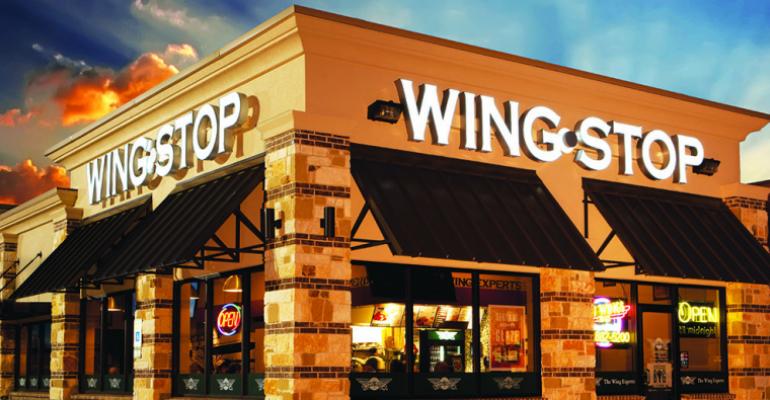 At 25, Wingstop has no plans to slow down

“Any business in this industry that can sustain for 25 years or more and continue the pace of growth that we have is truly unique,” Morrison said in an interview. “There are only a handful of companies that have exceeded that milestone and, certainly, have exceeded the milestones that we have as an organization.”

During the last three years, the limited-service chicken wing brand has seen a compound annual growth rate of 15% in systemwide sales and 14% in unit development. Over the longer term, the company has put together 15 consecutive years of same-store sales growth. The chain reported that its cumulative 56.4% same-store sales growth from 2012 to 2018 tops that of Domino’s, Starbucks, Burger King, Taco Bell, KFC, Baskin-Robbins, Dunkin, Wendy’s, McDonald’s and Pizza Hut.

“To be growing as fast or faster than any of the large chains in the industry today makes us very proud that we have been able to create a brand that focuses on wings as a center-of-the-plate item and has still, to this day, made a category all by itself,” said Morrison. “It’s truly a demonstration of sustainability and really positions us well for many years to come.”

Wingstop’s initial public offering in June 2015 has helped spur its expansion, in part by boosting consumer and shareholder awareness of the brand, according to Morrison.

“The success of our IPO was based upon our growth trajectory as well as the key growth drivers that we believe will continue to drive the business well into the future,” he said. “Since being a public company, our shareholders have enjoyed a total return of over 400%, which certainly exceeds anything that’s out there in the restaurant industry today.”

Morrison said Wingstop has a “clear line of sight” to become a Top 10 brand. Growth drivers include “fortressing” of key U.S. markets, international expansion, more national advertising, broader delivery service and continued migration to a digital platform — with a goal of being able to digitize every transaction. 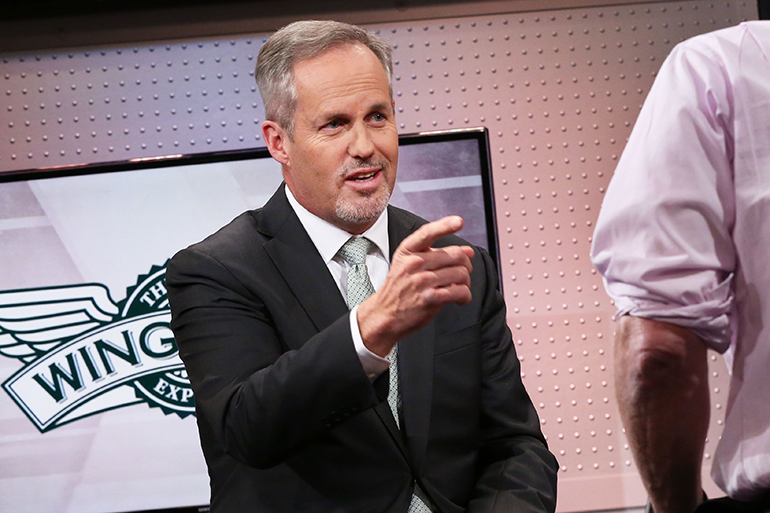 "We have been able to create a brand that focuses on wings as a center-of-the-plate item and has still, to this day, made a category all by itself," says Wingstop Chairman and CEO Charlie Morrison .

“As we continue to climb the ladder toward the Top 10 brands, we believe we can get there through those growth drivers, in fairly rapid order,” Morrison said. “Today, we believe that our brand has an equal level of opportunity for penetration in the U.S. and internationally. We’ve noted that our targeted U.S. penetration level would be about 3,000 restaurants. If you double that with our international footprint’s potential, that would lead us to become a Top 10 brand.”

Wingstop has identified 25 designated market areas (DMAs) in the U.S. to fortress, including in Arizona, California, Florida, Georgia, Illinois, Maryland, Massachusetts, Michigan, Missouri, New York, North Carolina, Ohio, Pennsylvania, Texas, Virginia, Washington and Wisconsin. The company now has 650 restaurants in those DMAs and another 320 locations in the pipeline. It aims to cover more than 75% of a DMA’s population with “restaurant-protected trade areas.”

“We believe we exist in a category of one; that means we don’t really have a true competitor. So ‘fortressing’ for us means a specific focus on key markets that hold the potential for the majority of our growth in the U.S. and achieving that top-end number of 3,000 restaurants — and doing so in a way that ensures we don’t invite competition into our business and maintain that category-of-one positioning,” explained Morrison. “We believe we have a ton of white space that doesn’t involve cannibalizing ourselves to get there.”

Globally, Wingstop also is targeting 25 key markets, with a potential of up to 150 restaurants each, for a total of around 3,000 international locations over the long term. The company now has 128 franchised restaurants in nine countries outside the U.S., including Mexico, Singapore, the Philippines, Indonesia, the United Arab Emirates, Malaysia, Saudi Arabia, Colombia and, most recently, Panama.

“Many of them are in markets that are very conducive to expansion of Westernized concepts like Wingstop and that have a high degree of chicken consumption per capita,” Morrison said.

“In Europe, we’ve started in the U.K. We launched our first restaurant there this year very successfully, and we’re getting ready to open our first restaurant in France,” he said. “We believe chicken consumption opportunities are huge there; France has some of the highest-volume KFC restaurants in the world.”

Wingstop has locations in Dallas-Fort Worth Airport, college food courts and Azteca Stadium in Mexico City, as well as a small-box concept in Singapore.

“We’re continuing to expand our learning about how to serve guests in those environments and make sure the food quality and speed of service are balanced so that it’s a successful venture,” Morrison added. “We believe we’ve done that in the locations we’re in already.”

In tandem with its location strategy, Wingstop is charting a path toward a 100% digital sales mix. Through its partnership with DoorDash, the chain now offers delivery at just over half of its U.S. restaurants. It expects to roll out the service to 80% of its locations by the year’s end, covering more than 960 restaurants in 44 markets.

Delivery is now available in six markets — Austin, Houston, Chicago, Denver, Los Angeles and Las Vegas — that represent about 30% of Wingstop’s restaurant count. The service accounts for 9% to 12% of the total sales mix in these markets, and eight of 10 delivery orders are new customers. Digital orders, too, have shown a $5 higher average ticket size. 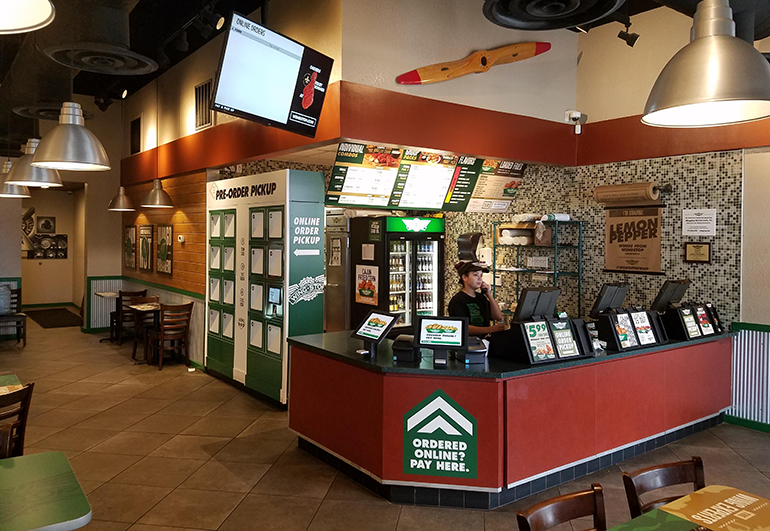 “I think we're way ahead of the game as compared to just about anybody else. We're only second to the large pizza chains in terms of our digital penetration as a brand,” Morrison said. “In fact, over 30% of our sales come into Wingstop via digital channels — web, mobile web and our app. So we don't even count transactions inside the store as digital, which is truly industry-leading. And we built a technological platform a couple of years ago to be able to provide a seamless, integrated digital transaction to our franchisees.”

He said he expects Wingstop to grow digital “well beyond” 50% of its total sales over the next several years. “Our goal is to get 100% of our transactions to become digital in some way,” Morrison said. “That doesn't mean the avoidance of human interaction. It simply means that we can translate them to digital orders, which adds efficiencies to the back of the house of our restaurants.”

To raise Wingstop’s brand awareness among consumers, the company launched national advertising in 2017 and this year raised the franchisee advertising contribution from 3% of topline sales to 4%.

“Our brand awareness in core markets is strong, but across the country it’s still well below that of our largest competitors, those Top 10 brands that we aspire to be,” Morrison pointed out. “Recently, we asked our franchisees to increase their contribution to our national advertising fund to increase the total dollars spent by almost 50%. The results we've seen so far this year, in the first quarter, were 7.1% same-store sales growth, which is industry-leading. But even more importantly, on a two-year basis, we rolled over 9.5% same-store sales growth. So 16.6% in two years is truly outpacing the industry. So I think the impact of this national advertising effort has been very effective for Wingstop.”

“We believe that platform has strong staying power because we really are more about being a flavor company than just the chicken wing itself. Our 11 flavors span the spectrum of mild to spicy and sweet to savory. So it gives people choice,” said Morrison.

Earlier this month, Wingstop kicked off a promotion dubbed “25 Days of Flavor,” which includes limited-time flavors Ancho Honey Glaze and Harissa Lemon Pepper, six new wing flavors, two new dips, one new side and an exclusive beverage — expanding its menu to 25 flavors in honor of the company’s 25 years.

“This is a great way to give people an idea that the flavors are really infinite as it relates to Wingstop,” Morrison noted.

To accommodate its growth, Wingstop last month signed an $18.3 million deal to acquire a 78,000-square-foot, three-story modern office building in Addison, Texas, to serve as its new headquarters. Just north of Dallas, and only about four miles away from the current headquarters the building will be solely occupied by Wingstop.

“We believe that this will give us an opportunity to add a number of things for our business — for one, a much more sophisticated test kitchen and consumer insights lab that will allow us to continue to test new innovations, whether that be food, flavor or technology,” Morrison said. “The other opportunity it presents is capacity for growth. We're growing out of the space that we're in today. And that's a demonstration of the strength of the growth of the brand so far.”