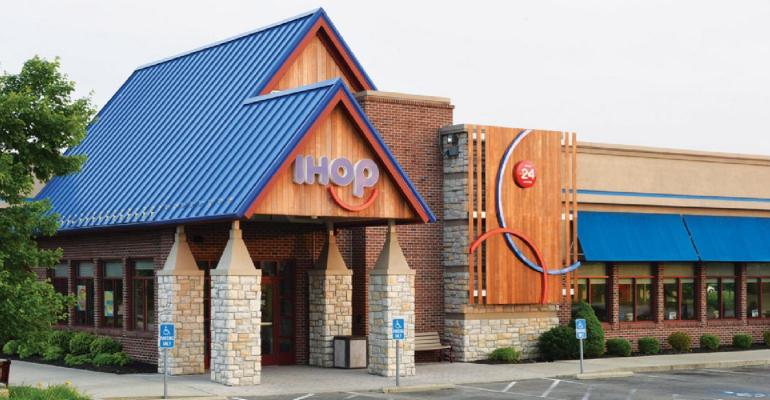 Up to 100 underperforming IHOP units may close in next six months.
News>Family Dining

Up to 100 underperforming IHOP units may close in next six months, says parent Dine Brands Global

Up to 100 underperforming IHOP restaurants may shutter over the next six months as a result of the ongoing coronavirus pandemic, parent company Dine Brands Global Inc. said Wednesday.

The company said about 15 Applebee’s are also expected to close permanently in the fourth quarter, though both brands are seeing steady improvement in same-store sales trends with most restaurants now open after the pandemic-related shutdown, though with limited capacity.

The casual- and family-dining sectors have been particularly hard hit by the pandemic, with indoor dining restricted — though both Applebee’s and IHOP have been steadily building off-premise sales, which grew during the quarter by 144% at Applebee’s and 154% at IHOP.

Steve Joyce, Dine Brands’ CEO, said the push to build off-premise at both brands is here to stay. “We believe the convenience of takeout and delivery will remain appealing to our guests, even as dine-in restrictions are eased,” he said in reporting the Sept. 30-ended third quarter results.

Applebee’s, for example, has been testing a delivery-only brand called Neighborhood Wings by Applebee’s in about 700 locations in partnership with Grubhub. John Cywinski, the brand’s president, said that program will be expanded nationwide.

The casual-dining chain has also had success with its Mucho Cocktail program, which is now available for to-go in about 30 states, he said. This month, Applebee’s is promoting Halloween-inspired $5 Spooky Sips, like Dracula’s Juice (a margarita meets a daquiri) or the tropical Tipsy Zombie topped with a “gummy brain.”

Overall at Applebee’s, off-premise sales accounted for 34.6% of the sales mix for the third quarter, including 11.5% for delivery and 23.1% for takeout — even with 1,595 of the chain’s 1,614 franchised and company-owned restaurants now open for in-restaurant dining. Three units remained open for off-premise only, and 16 were temporarily closed.

Applebee’s overall same-store sales for the quarter were down 13.3%, but sales trends improved steadily week-by-week, ending with positive comparable sales (up 0.4%) the week ended Sept. 27, the company said.

Cywinski said Applebee’s is truly symbolic of America and he expects the brand to thrive next year. “After being knocked down,” he said, “We will get up, dust off and get back on that horse.”

IHOP, meanwhile, faces obstacles as workers across the country remain at home and are less likely to dine out for breakfast.

Weekly comparable sales improved in 10 out of the 13 weeks, said brand president Jay Johns. For the quarter, domestic same-store sales were down 30.2%.

Johns said he was confident the fewer than 100 units that are not expected to make it through the pandemic would likely be replaced by better-performing units with pre-COVID average unit volumes of about $1.9 million.

Johns pointed to the IHOPPY Hour program, launched at the end of September, featuring a value-oriented menu of dishes for $5 or $6 between 2 p.m. and 10 p.m., which he expects will drive traffic, particularly at “fringe” dayparts.

At the end of the quarter, there were 1,425 IHOP units open for dine-in of the chain’s 1,683 domestic total, which are all franchised or licensed. Another 167 were open for off-premise only, and 91 remained temporarily closed.