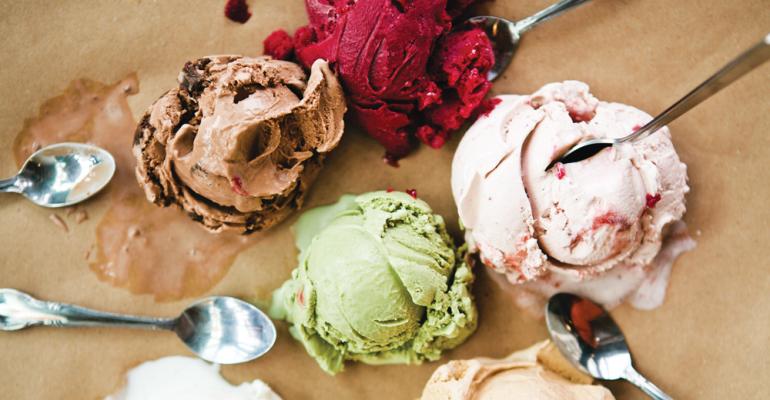 The deal marks the latest in a series of investments by New York-based USHG, which earlier this year invested in Joe Coffee, a specialty brand, with plans to grow on the East Coast. In 2015, USHG made a significant minority investment in the Los Angeles-based Tender Greens chain.

“While we fell in love with Salt & Straw’s craveable ice cream the moment we polished off our very first pint, what really blew us away was witnessing the joy Kim Malek and her team bring to their staff and guests while scooping flavors in their beautiful stores,” said Meyer, CEO of USHG, in a statement.

The Maleks said the funding would be used to hire and train staff and build infrastructure for the growing Salt & Straw brand, including a state-of-the-art commercial kitchen in Portland and a production facility in San Francisco. The company is also developing an artisan incubator program to help young businesses get their start, including some of the artisans providing ingredients for Salt & Straw ice cream flavors, like Portland chocolate makers Charlie and Jessica Wheelock, who make the chocolate for the Freckled Woodblock Chocolate ice cream.

“We’ll work with two to three artisans every year and sign on as they’re getting their business up and running as one of their customers,” Kim Malek said.

The partnership will also include offering advice on best practices, from manufacturing and logistics to human resources, she added.

This year, the company plans to open its first unit in Seattle and a second location in San Francisco.

A cult favorite on the West Coast, Salt & Straw is known for its use of local, organic and seasonal ingredients, as well as its unusual flavors, like black olive brittle and goat cheese; green apple and wasabi flowers; or iris liqueur and edible flowers sorbet. Salt & Straw is also known for its progressive workplace policies, which were developed in part with Meyer’s influence. The Maleks attended USHG’s Hospitality Quotient training inspired by Meyer’s book “Setting the Table.”

The training led the Maleks to develop their own training, called Salt & Straw University. The company is piloting a community-based hiring program in partnership with local groups like United Way, Gateway to College and local state parole boards to provide training to people looking to re-enter the workforce, as well as hiring some at Salt & Straw.

USHG said Salt & Straw ice cream will be served at the group’s new Daily Provisions, next door to Union Square Cafe, which will be the ice cream chain’s first outlet in New York City.

Later this summer, the ice cream will also be available at USHG’s Studio Café at the Whitney Museum of American Art in New York City.

“We can’t wait to introduce more of our friends to Salt & Straw, and are grateful for the opportunity to do all we can to help this wonderful business continue to flourish,” Meyer said.