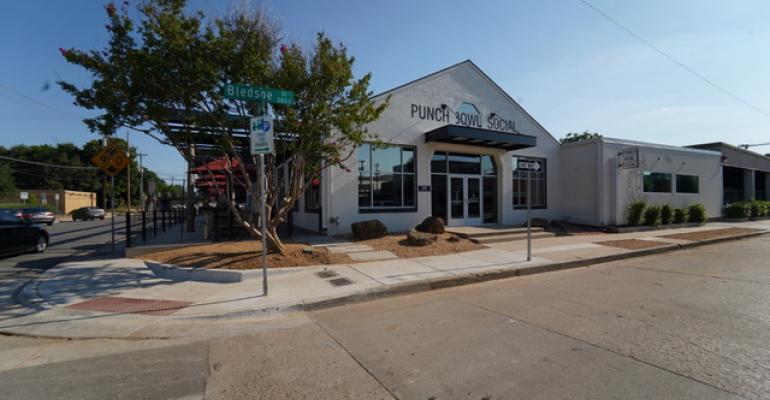 Punch Bowl Social this week closed its first smaller-footprint location in Fort Worth, Texas, just a little more than three months after it opened, the company confirmed Thursday.

“After service on Nov. 5, we made the difficult decision to close our Fort Worth location,” said Peter Gaudreau, chief operating officer for the Denver-based Punch Bowl Social, in an emailed statement.

“We opened in the West 7th area with the best intentions and deeply appreciate the support that the neighbors and community showed us,” Gaudreau said. “Unfortunately, we didn’t believe we could be as successful as we wanted in that particular location.”

The unit had opened in late July, covering 12,500 square feet, a significant reduction from the brand’s typical 24,000-square-foot location, a version of which had opened in June in nearby Dallas.

The Fort Worth location had been the 18th for the company, opened just after Lebanon, Tenn.-based Cracker Barrel Old Country Store Inc. announced a $140 million investment in the “social experience company, a stake acquired from the private-equity firm L Catterton.

“We very much believe in Fort Worth and know we can be as successful there as we are in Dallas and other markets,” Gaudreau said. “It is our hope to relocate to another part of the city in the near future.”

The first Punch Bowl Social opened in Denver in 2012, and the concept was a Nation’s Restaurant News Hot Concepts honoree in 2018.

Robert Thompson, founder and CEO Punch Bowl Social, met with Nation’s Restaurant News at the Fort Worth unit in August for part of an Extra Serving podcast.

Before the Fort Worth opening, Thompson had said most of the locations going forward would be in the larger-scale format.