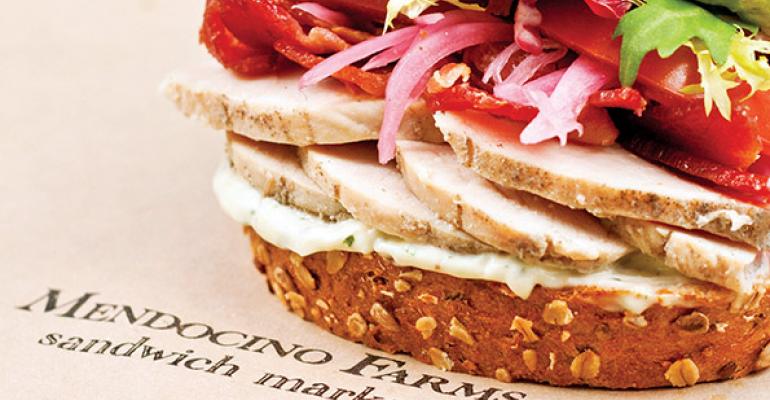 Mario Del Pero, co-founder of Los Angeles-based Mendocino Farms, did not disclose terms of the investment. But he said in an exclusive interview with NRN that the partnership will help the 11-unit, better-sandwich chain build infrastructure as it expands into the San Diego and San Francisco Bay Area markets in late 2016.

As part of the deal, Whole Foods plans to test the opening of Mendocino Farms outlets in select market locations.

Though specific locations have not been set, the test likely will include outlets of the new more value-positioned, secondary brand “365 by Whole Foods Markets,” which are scheduled for launch in the second half of 2016, mostly on the West Coast. Five leases have been signed for the 365-concept market locations, with the first scheduled to open in Los Angeles’ Silver Lake neighborhood. The grocery chain expects to double the number of 365 units in 2017.

More restaurant concepts may be coming to Whole Foods. In the grocery chain’s July earnings call with Wall Street analysts, officials said the new 365 concept will have “Friends of 365,” vendors that will rent out part of the space to give more local flavor and lower capital investment and labor costs.

David Lannon, executive vice president of operations at Whole Foods, said in a statement: “Mendocino Farms is one of the best sandwich and salad concepts coming out of Southern California and we believe it’s one of the top emerging restaurant brands in the country. We are always looking at trends in the food industry, especially those that complement our existing offerings. Aside from offering delicious, high-quality products we think our customers will love, Mendocino Farms’ core values align well with our own, and that’s very important to us.”

Founded in Austin, Texas, in 1978, Whole Foods has 431 stores in the U.S., Canada and the United Kingdom. In fiscal 2014, the chain recorded about $14.2 billion in sales, and about 100 store locations are in development.

Del Pero said the first Mendocino Farms in a Whole Foods will likely be in Orange County, Calif., or the Los Angeles area, but the test may also include Northern California.

“We’re planning to test a couple and assess from both the Whole Foods and our standpoint,” Del Pero said. “We want it to be mutually beneficial.”

The Mendocino Farms units in Whole Foods will be wholly operated by the sandwich chain, he said.

“Whole Foods will be a de facto landlord,” Del Pero said. “We’ll have the full Mendo menu and kitchen, and it will be fully staffed by Mendo team members.”

The partnership makes sense because Whole Foods and Mendocino Farms share a customer base, he added.

“We think we can be a great anchor for their food halls,” said Del Pero. “We think it will bring that consumer to Whole Foods more often.”

At Whole Foods, the Mendocino Farms units will also be able to keep the sandwich brand’s unique emphasis on design, with a standalone feel and brand identity. Del Pero said the test locations will be developed by design firm D.L. English, which is also designing the Brea unit to open next year and has worked with Whole Foods in the past.

For Mendocino Farms, Del Pero said he hopes the partnership will also give the sandwich chain help in building access to local suppliers in the organic and natural food world as the chain moves outside California.

“So much of this is about needing to learn about how to scale sustainability,” said Del Pero. “Whole Foods can help mentor us in that area. It’s pretty incredible to have them share with us how to do it the right way.”

Founded in 2005, Mendocino Farms falls into the premium fast-casual niche, with chef-driven sandwiches and salads made with sustainable ingredients, including produce from Oxnard, Calif.-based Scarborough Farms; free-range chicken from California suppliers and meats that are humanely raised without hormones or antibiotics.

With an average ticket of about $12.50, the chain has an average unit volume of about $3.2 million in locations that are typically about 2,800-square feet.

In 2012, Mendocino Farms received another significant capital investment from private-equity firm Catterton. At the time, the chain had only five locations.

Del Pero envisions Mendocino Farms as a national brand, but not necessarily the biggest of sandwich chains.

“I see it as about a 250-unit concept that could be in maybe 40 great cities, with a few special stores in each city, and an incredible supply chain and great team members, and guests loving us,” he said. “We’re very passionate about bringing a quality product and delivering it in a quality way, so we’re very particular about not watering down what we’re doing.”