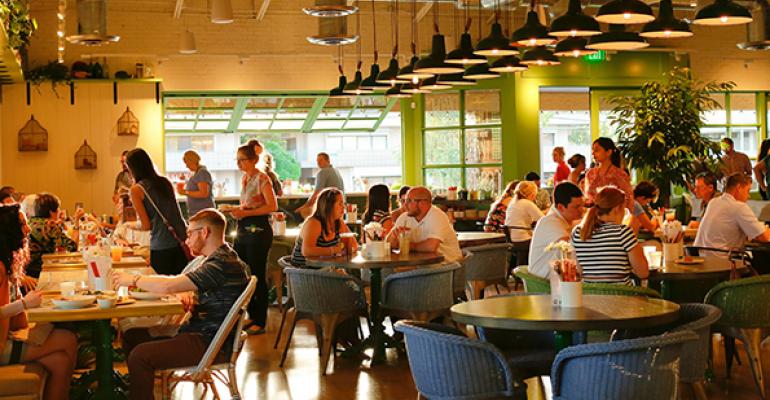 GALLERY: A look inside the first Flower Child restaurant

Fox Restaurant Concepts is planning to grow outside its home state of Arizona over the next three years, and is ramping up expansion of its new fast-casual Flower Child concept, founder Sam Fox said.

The company is looking forward to growing nationally, Fox said, even though its North Italia brand has been in states outside Arizona for more than 11 years, with units in Austin, Texas; Denver; and Kansas City, Mo., as well as Tucson and Phoenix. That brand will open in Houston and Irvine and Manhattan Beach, Calif., in 2015, he said.

“We have a good foundation of leadership in the organization,” Fox said. “We’ve had success with our brands in Arizona and have a lot of restaurants there. Now it’s time to take some of those on the road.”

The goal is “to grow into a national restaurant company,” he said. The operator already has 49 restaurants over 16 brands in six states.

Hear more from Fox about growth >>

Flower Child, which opened in May near the company’s Phoenix headquarters, would expand proportionally faster than the company’s other brands, Fox said in an interview earlier this month at MUFSO. He anticipates 13 units to be open by the end of 2016.

“We’re really going to be pushing on Flower Child,” said Fox, adding that he has signed leases for four new units in 2015, with two more planned for the Phoenix area and two for the Los Angeles-Santa Monica. The company anticipates eight more Flower Child locations in 2016, including at least one East Coast city.

“It has been really, really well received,” Fox said.

“What’s been surprising is that the take-out, to-go business has been over 30 percent” of sales, he said. “We feel supermarket business has been taking a lot of the home-meal replacement. We’ve built in a program at Flower Child that sort of competes with that.”

“Everything is vegetarian- or vegan-based, and then you add your protein in,” he said. “We have eight salads and four different proteins that you can add in to those.”

“You can build a plate around a protein and two or three sides,” Fox said.

Fox calls the menu “better fast casual.” The service model is designed for customers to order at the counter, and food is delivered to the tables.

“The advantage of being a growing multiconcept restaurant company is the ability to promote and retain employees, Fox said.

“We use brands like Sauce to help train someone who might grow into becoming a manager at a full-service opportunity if they want,” Fox said.

He added that of Fox Restaurant Concepts’ corporate staff of about 60 employees, more than 30 have been promoted from the unit level.

However, menu changes challenge the multiconcept format, Fox added. The company has more than 356 different menus offered at one time.

“It’s really hard on menu changes,” Fox said. “We have 12 concepts that change menus four to six times a year. The menu development process is hard. … We’re looking at all our processes and trying to make it easier on the people.”