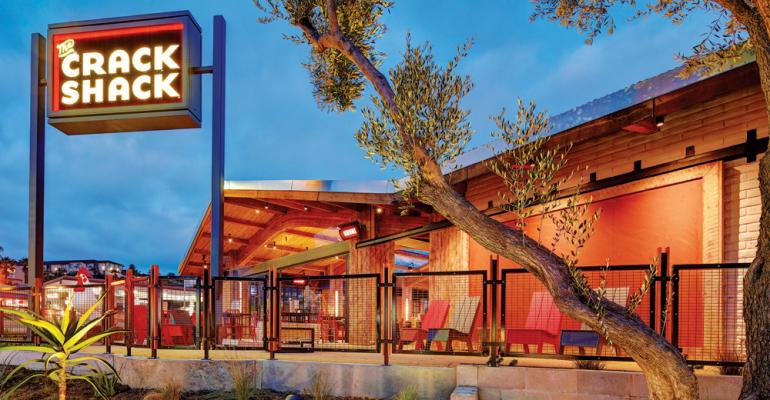 The Crack Shack seems to have broken the code of getting customers to pay more money for better food in a limited-service environment.

CEO Michael Rosen and chef Richard Blais, a runner-up on Bravo TV’s “Top Chef,” were already partners in the restaurant Juniper & Ivy, in San Diego, when they opened the first Crack Shack in 2015. Located in a shed next door, the spot featured open-air seating, a bocce court and a menu of fried chicken, chicken sandwiches, salads, all-day breakfast and a full bar.

Customers order and pay at a counter, but food is delivered to tables, where additional drink orders are taken.

Unlike fast-casual and quick-service restaurants, the chicken is premium, super-fresh Jidori chicken, “which is the same chicken used in Michelin-star restaurants,” Rosen said. “We get it 24 hours from wandering in a pasture to putting it on a plate.”

It’s not cheap: The average per-person check is between $20 and $25, but Rosen put it in perspective.

“Our chicken is a very affordable luxury,” he said. “It’s far more expensive than KFC and Popeyes, but it isn’t expensive.”

The average check also includes drinks. Rosen said about half of customers order craft beer, cocktails or wine, which in total account for about 20 percent of sales.

Rosen and Blais opened the second Crack Shack in February, in Encinitas, Calif. A third location, in Costa Mesa, Calif., is slated to open in August. Two more leases in southern California are in the works, and locations in Los Angeles are also being considered.

All photos courtesy of The Crack Shack.