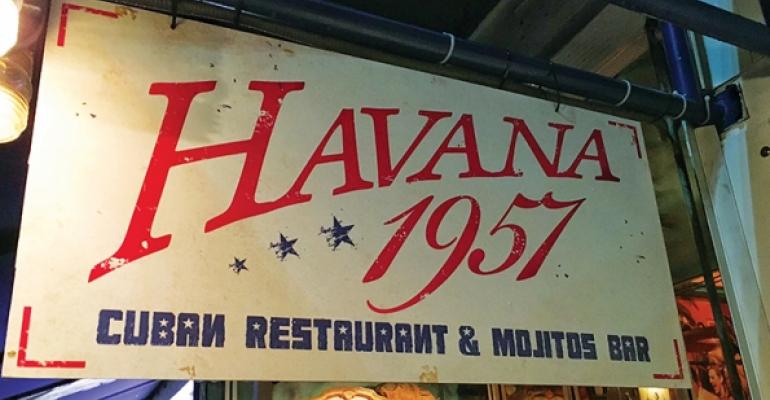 With the United States having restored diplomatic relations with Cuba in 2015 after more than 54 years of estrangement from the Cold War, the hearty island cuisine and stiff rum-based Cuban drinks are poised for a renaissance.

Nowhere has this renaissance gotten more of a head start than at the four-unit Havana 1957 in the Miami area.

And like the Copa Cabana in Cuba, Havana 1957 stays open late — closing at midnight Sundays through Thursdays and 1 a.m. on Fridays and Saturdays.

Havana 1957’s mojito bar stocks over 120 varieties of rum from around the world, and the restaurant offers a wide variety of cocktails.

Most entrées are priced between $12 and $15. Specialty drinks, including the mojito, are about $11. The costumed staff said the most popular dish remains the Pollo Havana 1957 at $19.95, which features roasted chicken in a Cuban gravy with white or yellow rice, black beans, salad and sweet plantains. The menu also offers daily specials, seafood, sandwiches and soups.

And for those seeking lighter fare, the menu includes an “El Havanero Delgado” — or “Skinny Cuban” section — that weighs in at less than 500 calories.