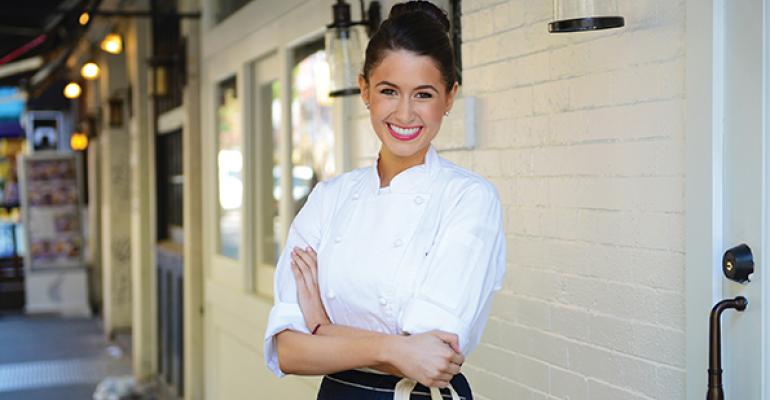 By Chloe serves burgers, sandwiches, fries, pasta, salads, beer, wine, juices and baked goods in a fast-casual setting. It’s also completely vegan, but it’s run by the owners of one of the most popular steakhouses in New York City.

The face behind By Chloe is co-owner Chloe Coscarelli, cookbook author and winner of the Food Network’s “Cupcake Wars.” She is also a lifelong vegetarian and has been vegan for the past 10 years.

She contacted ESquared Hospitality, which owns BLT Steak and nine other restaurants, because she thought working with an established company would get the ball rolling faster.

“I think when Chloe came into the meeting, our CEO, Jimmy Haber, didn’t even know what vegan was,” said ESquared’s Samantha Wasser, now a partner in the restaurant. “What was more intriguing to him was a quick-service restaurant. ... That seemed to be where the industry was headed.”

The concept also has the potential to appeal to a broad audience, Wasser said.

“Lots of people eat vegan food, even if they don’t subscribe to the whole vegan lifestyle,” she said.

Coscarelli said the restaurant, which opened last July near the campus of New York University, gets a mix of people, including a late-night crowd on weekends.

Sandwiches range from $6.95 for avocado toast with vegetables and almond “Parmesan” to $10.95 for the Whiskey BBQ with smoked portobello and seitan. Salads start at $9.95.

Two locations are slated to open by this summer.