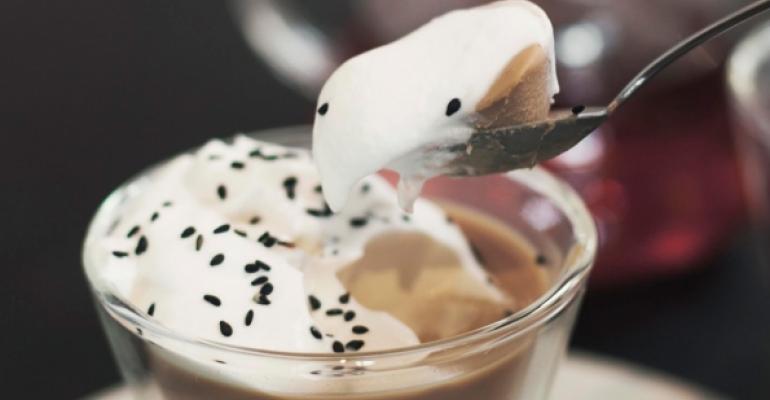 Year in desserts marked by classics with a twist

Take a look at the 2016 trends that have staying power

It was a year filled with classic cakes, pumpkin spice alternatives and over-the-top frozen indulgences. But just like with baking, some desserts stick and others don’t. Take a look back at some of the trends that appeared on restaurant menus this year that are likely to have staying power. Partly in response to consumers’ increased snacking habits, many chefs broadened their dessert offerings, and perhaps boosted their sales, with the addition of snackable, portable desserts.

At the take-out counter at Townline BBQ in Sagaponack, N.Y., pastry chef Rachel Flatley offered ice cream tacos — housemade waffles shaped like tacos and filled with a rotating selection of housemade ice cream. They were then dipped in chocolate and decorated with Valrhona dark and white chocolate pearls.

Inspired by the Snack Pack pudding cups of her childhood, Amy Brandwein, chef and owner of Centrolina in Washington, D.C., offered budinos — rich custard individually packed in a to-go cup with a spoon.

Traditional French macarons in flavors such as mango passion fruit and chocolate raspberry were among the small and munchable on-the-move desserts offered at La Boutique, the pastry shop attached to Le Petit Paris in downtown Los Angeles. While some pastry chefs have been focused on removing ingredients from their desserts (think: gluten, animal products, sugar), other chefs explored adding unexpected ingredients to desserts, such as coffee, tea and nuts, where they wouldn’t typically appear. Though the number of ingredients readily available to chefs continues to expand, this year they still relied on old favorites, but sometimes in different forms, like chocolate shaped like cold cuts and entire dessert tastings made with summer fruit.

At Urban Farmer Portland in Portland, Ore., pastry chef Hillary Kirkton offered a Chocolate Board, featuring a selection of indulgences served on a wooden plank that resembled savory cheese and charcuteries boards. Items on the board included spreadable chocolate mousse with cookies, housemade marmalade meant to pair with chocolate, as well as shot glasses of drinking chocolate, and a layered chocolate, caramel and praline candy bar.

Fruit featured into every course of the dessert tasting menu at Gracie's, including a sunberry cheesecake mousse made from fruit grown on the restaurant’s rooftop garden.

At the Hairy Lobster in Portland, Ore., co-owner and executive pastry chef Mellisa Root highlighted in-season strawberries with a sliced brown butter and strawberry financier with roasted strawberries and compressed strawberries. Her tribute to the fruit was served alongside a crème Catalan and finished by topping the financier with a strawberry consommé poured tableside from a vintage China teapot.