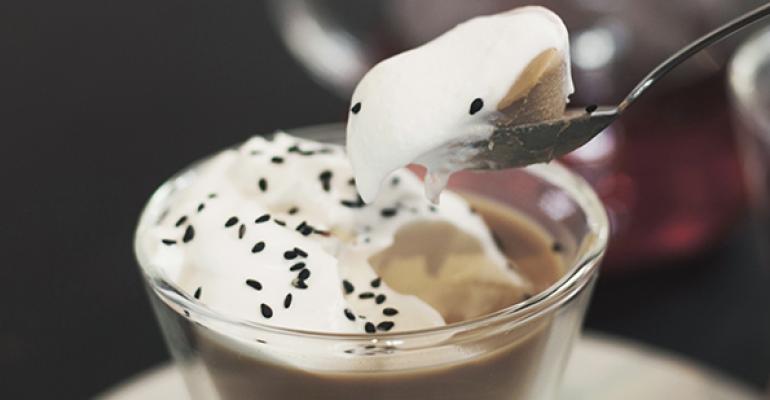 Chefs incorporate coffee, tea to give desserts a kick

The beverages move from a dessert accompaniment to essential ingredients

Coffee and tea have long been the most popular beverages enjoyed alongside desserts of all kinds, but lately, chefs have been increasingly using coffee and tea in the desserts themselves.

According to Datassential MenuTrends, desserts with coffee and tea as ingredients are showing growth on menus. Coffee/espresso desserts appear on nearly one quarter of dessert menus, a 2-percent increase over a year ago. Though tea-based desserts are less common, appearing on just 5 percent of dessert menus, they are showing sustained growth over a one-year and four-year trend. Espresso is the fastest growing coffee variety, while matcha, a Japanese green tea powder, is the fastest growing tea variety.

“From a delicate sencha to a hearty Lapsang Souchong, the methods of application for tea are seemingly endless. Teas are some of the best spices for dishes both sweet and savory,” said Valerie Gordon, culinary director of American Tea Room, based in Beverly Hills, Calif. “I enjoy using teas in desserts because cream and butter are the perfect conduits to expand the nuances in a tea’s profile.” 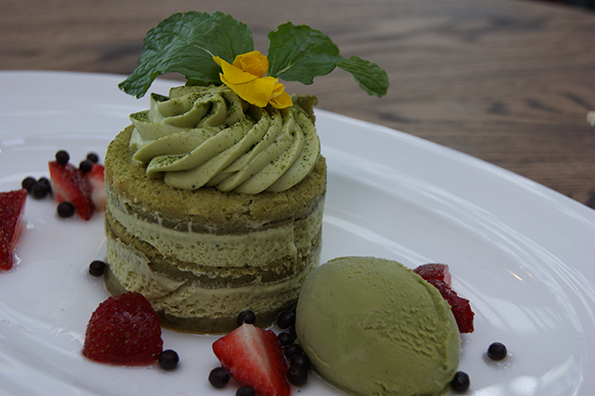 Tiramisu gets a matcha tea redux at Roku in Los Angelos. Photo: Roku

Gordon is currently offering a Ceylon panna cotta with Ceylon tea-infused cream topped with black sesame seeds at American Tea Room’s café in downtown Los Angeles. The tea-forward dessert is one of the best-selling items on the restaurant’s menu. It’s so popular that Gordon plans to debut a matcha version of the panna cotta in a few weeks.

At Pazzo Ristorante in Portland, Ore., pastry chef Alisha Falkenstein serves a matcha green tea sponge cake with white chocolate and goat cheese mousse. The white chocolate mousse with a hint of goat cheese and flecks of vanilla bean is filled with raspberry curd and served atop a matcha green tea sponge cake and garnished with freeze-dried raspberries, caramelized sugar and matcha powder.

“I really like using matcha tea, because it is a great showcase ingredient, with its sweet and grassy flavor notes and vibrant green color,” Falkenstein said. “Along with its unique flavors, matcha also contains a great amount of nutrients and immune boosters, which is always an added bonus when working with sweets.”

Matcha is also on the dessert menu at Roku, Innovative Dining Group’s new Japanese-inspired concept in Los Angeles. The restaurant’s matcha tiramisu is a sponge cake made with the green tea powder that is soaked in milk, brandy and sugar, topped with a creamy mixture of mascarpone cheese and matcha, and served with green tea ice cream and strawberry sauce.

At Urban Farmer in Portland, Ore., inside The Nines hotel, pastry chef Hillary Kirkton offers the No. 9 Tea Ice Cream Sundae. It’s made with ice cream steeped with the hotel’s signature blend of black tea with rose petals, topped with a drizzle of Bee Local Portland Farmland Honey and Bee Local pollen and served with an assortment of tea cookies.

Other chefs have been stirred by past and present coffee trends to create coffee-forward desserts.

Meanwhile, the wild popularity of pumpkin spice lattes motivated Tyson Peterson, executive chef at Spoke & Steele in Indianapolis, to create an espresso budino with cinnamon roasted pumpkin seeds. For this reimagined classic, Peterson makes a slow baked, espresso-infused custard, then tops it with nitrogen-infused cream to mimic the texture of latte foam, and pumpkin seeds roasted and candied with cinnamon and nutmeg.