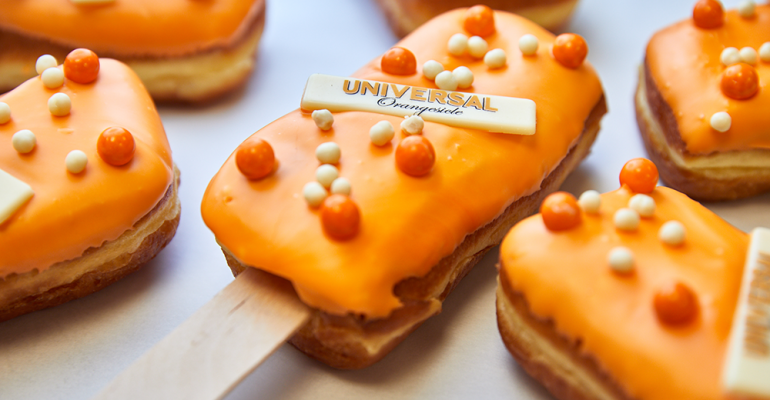 The stuff of Dreamsicles: Restaurants riff on frozen classic

Orange-vanilla combo is a hit on social media, and in people’s mouths

In 1920, Harry Burt, an entrepreneur in Youngstown, Ohio, created ice-cream bars on sticks that he branded Good Humor and distributed via pushcarts and trucks. His original combination of vanilla ice cream with a chocolate coating expanded to include a stable of drool-worthy varieties, one of which combined vanilla ice cream with orange sherbet. Burt dubbed it the Dreamsicle, and together with Creamsicle, its contemporary first cousin from another inventor, it serves as inspiration for a range of modern menu items nearly a century later.  Chefs are putting its patron-pleasing, sweet-but-slightly-tangy flavor to work in a range of retro-cool items.

Cool delights. Dairy Queen never misses an opportunity to put tasty treats on ice, and this year the company welcomed spring with the new Dreamsicle Dipped Cone (left), consisting of vanilla soft-serve with a day-glow orange-vanilla coating that sent the internet into overdrive.  West-Coast competitor Wienerschnitzel is rolling out the Orange Cream Dipped Cone and Orange Cream Shake, while Cold Stone Creamery is whipping up some icy pleasures of its own with the promotional Orange You Doll-icious. The limited-time special is made with orange ice cream and vanilla whipped topping; fizzy candy clusters on top add an unexpected frisson of fun.

Baskin-Robbins features a Creamsicle Milkshake, and aficionados of corporate sibling Dunkin’ have extolled the virtues of that chain’s Creamsicle Coolatta, a not-so-secret item from the “Secret Menu” that combines the existing vanilla bean and orange options. Another not so hush-hush hack from McDonald’s customers suggests topping a cup of vanilla ice cream with a splash of orange soft drink for an indulgence reminiscent of the chain’s promotional Arctic Shake.

Cool doughnuts. Portland, Ore.-based Voodoo Doughnuts, which built its business on the unexpected and the edgy, introduced the Universal Orangesicle last summer, which is available exclusively at Universal CityWalk in Orlando, Fla. Madly photogenic, the Bavarian-cream-filled pastry is covered in citrus frosting and then topped with chocolate pearls. Best of all, it’s on a stick.

More conventional in form but equally fun in execution is the Dreamsicle Bar from Stan’s Donuts & Coffee, the Chicago arm of the Los Angeles original. The customer favorite can be found on the menu between the Chocolate-Orange Old Fashioned and Orange Old Fashioned Donuts. Speaking of fun, the Orange Dream Star, a five-pointed delight at Atlanta’s Sublime Doughnuts, is filled with orange-infused cream and finished with an orange glaze.

On a warmer but still cool note, three-unit Coffee Bar in San Francisco served an Orange Cardamom Creamsicle Coffee that combined simple syrup infused with cardamom, orange zest and a little salt to cold brew coffee with milk. In a similar vein, Valley Inn Restaurant & Bar in Sherman Oaks, Calif., is an old-line favorite with some new-age specials like Iced Coffee a l’Orange that combines vanilla ice cream, orange liqueur and coffee served over ice.

Cool CBD. Harry Burt’s creation is helping 21st-century consumers keep their cool as CBD-enhanced, Dreamsicle-inspired items proliferate faster than non-hallucinogenic mushrooms. In Philadelphia, Fuel restaurant invites its patrons to recharge themselves and then helps things along with CBD Orange Dream, a smoothie that boasts orange juice, yogurt, a French-vanilla shot and a boost of 0.5ml cannabidiol oil. In New York City, vegan chain By Chloe has been selling its line of CBD-infused snacks, sweets and treats, dubbed Feelz, through its stores in New York City, and selections have included an Orange Dreamsicle Smoothie infused with all-natural, full spectrum hemp extract.